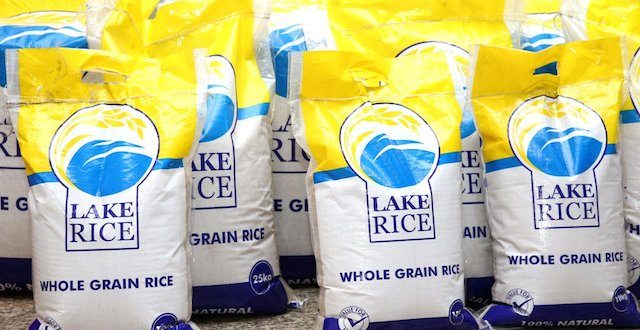 Ambode’s Lake Rice: Full List of Where To Buy

The Ambode government commenced the sale of the rice on Wednesday in centres across the 57 local governments and local council development areas.

Lake Rice is a product of the joint agricultural venture between Lagos State and Kebbi State Governments, designed to ensure food security and showcase Nigeria’s ability to become a rice producing nation.

The name Lake Rice is borne out of the acronyms of the state with LA standing for Lagos and KE for Kebbi.

Mr Sanni Okanlawan, the Special Adviser on Food Security to Gov. Akinwumi Ambode told the News Agency of Nigeria (NAN) that the government was fulfiling its promise of giving residents a blissful Yuletide.

Okanlawan told NAN that the price of the rice was reduced N12,000 from N13,000 to ensure that Lagosians had access to it for an enjoyable Christmas celebration.

“We are happy to inform Lagosians that the Lake rice is out and available at the various local government areas and local council development areas.

“A 50kg bag is currently selling at N12,000 that is a huge discount considering the price of rice at retail markets.

That shows how eager the state government is to give its folks the best.

“So, we urge everybody to go to those locations to get their bags from today,’’ Okanlawan said.

The special adviser, however, said he could not confirm the number of trailer loads at each sales point but assured that they were enough to go round.

When NAN visited the Oko-Oba, Agege sales point, two 40 foot trailers were seen loaded with the produce, while a crowd queued at the center to purchase the rice.

One of the buyers, Mr Segun Esan, said he had heard from media reports that the rice would be out and had come quickly to purchase before Christmas Day.

Esan said he would prefer Lake Rice because it was fresh and made in Nigeria which was very cheap compared to imported rice presently sold at N18,000 in some markets.

A teacher, Mrs Felicia Ajiroba, commended the government for the initiative, adding that the rice would ensure that residents had food during the festive period.

“When I learnt that the price of rice was N20, 000 in the market, I was worried because I felt I would not cook rice for my family during Christmas.

“It was too expensive and I cannot afford it with my meagre salary.

“The subsidised Lake Rice is comforting and a blessing to many residents of Lagos. It shows that the government is concerned about our plight,’’ she said.

Mrs Wosilat Elegbede, a trader at Ikorodu, said that the rice would alleviate poverty and hunger in the state.

“The case of people stealing pots of rice on the fire would not arise in the state as the price is subsidised and people can choose the size of bag they can afford,’’ Elegbede said.

According to him, their presence is also to monitor sales of the rice and ensure that every person got at least a bag.

He said that the presentation of Lagos State Residents Registration Agency (LASRRA) card was a criterion for purchasing the rice.