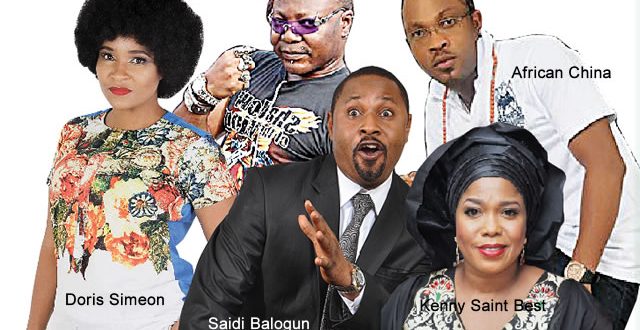 October 1, 2016 Comments Off on Independence Day Not Worth Celebrating –Nigerian celebrities 18 Views

As Nigeria celebrates its 56th anniversary as an independent nation, some Nigerian celebrities tell Saturday Beats about their thoughts on the current state of the nation

For ace actor, Saidi Balogun, Nigerian entertainers have nothing to celebrate today due to the adverse effect of piracy on the sector. The actor is sad that a 56-year-old country does not have any stiff penalties for pirates. In his words, he said today should be a day for mourning and not celebration.

“Nigerian entertainers should be in a mourning state. It is not for the country alone but for our industry. The National Assembly has refused to pass bills with stiff penalties on piracy. Now the price of crude oil has crashed and everyone is crying whereas we could generate money from the entertainment industry and everybody would be smiling. It is not an independence that is celebrating it because we are still dependent. We entertainers are still under the colonialism of the legislators. Maybe they are afraid that if they pass the right bill against piracy, they would not be able to enslave us anymore. To me, entertainment can boost our economy aside from our dependence on crude oil. Does it mean that if there is no crude oil, our economy would die? Let them pass the right bill so that we can make more money and improve on our country. Three years ago, a president said that our industry contributes greatly to the economy’s GDP, so, they should please pass laws with very stiff penalties on piracy. If I had my way, I would have asked all artistes to march with placards to the house of each legislator who is in any committee that has to do with the entertainment industry on Independence Day. Since their lives are all about padding, they should help us ‘pad’ that law,” he said.

KSB on her part believes that today is not a happy day for Nigeria because of the hardship in the country. According to the singer turned politician, Nigeria is not really independent. She told Saturday Beats that Nigerians are only surviving and that should not be the case of the citizens of a 56-year-old country.

She said, “We are celebrating an inverted independence. We are celebrating a dependent independence and the painful aspect of it is that we don’t really know what we are dependent upon. We would have been having a merry independence if the corruption eating deep like a virus had been curbed during that era of War Against Indiscipline. If the military that introduced the WAI were disciplined themselves, by now we would have been celebrating a cheerful independence. It is unfortunate that we still have the same virus eating into the fabrics of our society. All we have is a change of costume of leadership and this hasn’t allowed Nigeria to become the independent nation that it should be. It is quite unfortunate. Our economy can’t seem to stand on its own. A particular government may seem to have got things right, then another one takes over and sucks it dry, then we begin from square one. We are celebrating a sickly independence. Before now, we used to have individual buffers in case of hard times but this time around, there is no buffer from anywhere. Maybe this would now lead us to the kind of independence that the country actually requires. Right now, Nigerians need to be productive; we need to look inwards and realise how we can make this country work. Before now, we have been thriving on the largesse of corruption. Now that there is nothing to suck anymore, it would force us to think of what to do. It would teach Nigerians to cut their coat according to their sizes. We are seeing cases of parents who had to bring their children back to Nigerian schools because they could not afford to pay their fees abroad. It is time to bring these kids back, put them in public schools and these influential parents should begin to think of how they can make our public schools better. We are the only ones that can make it work through truth, sincerity, honesty and pro-activeness. Nigerians are surviving and for a country that got its independence 56 years ago, we should not be thinking of surviving.”

Although the Area Fada, as he is fondly called, is not happy about the situation of the country, his anger lies with Nigerians and not their leaders. The weird one said that Nigerians are the cause of their problems. He added that there was nothing worth celebrating in the country presently except the gift of life which is God’s doing.

“What are we celebrating? The only thing a Nigerian can be thankful for at this time is the gift of life. All that is happening to us is our fault. Every time we put the blame on the leaders, what about the followers? These leaders are not from Ghana or Togo; they are from among us. If we don’t look like them, we should have resisted the policies that put us in this kind of hopelessness and frustration. But it is because we look like them, somehow we have the same mindset and we are waiting for our own turn to embezzle when the opportunity comes, that is why this situation is never going to change. Mark my words; it is going to get worse before it gets better. If the masses have become sheep, why are you blaming the leaders for being wolves? The president keeps saying he is fighting corruption; maybe it is true that he is fighting corruption but he is the only one shouting the propaganda. I don’t see his ministers and cabinet members say the same thing. Do they believe in that? They are fighting corruption; are they saying that they have not been able to prosecute and imprison one corrupt person so far? After one year? Do we want to be deceived all our lives? It is not about Buhari or Goodluck, what about us? We are very bad people and until we change, things would not get better. The change is not going to come from above or from Buhari, it would come when we change the way we think and hold our leaders accountable for all the wrongs they have done. Until we are ready for that, then nothing would change because these people know that poverty has messed up the way we think. There is nothing to celebrate except for us being alive and for that, say thank God. But for how long would we do this?” he said.

Delectable screen goddess, Doris Simeon, on her part said that Nigerians are not happy currently. She advised that instead of celebrating the independence, Nigerians should embark on fasting and prayer.

Simeon said, “Nigerians are not happy with what is going on in the country right now. We are not happy at all. I think it would be so sad and crazy if our government celebrates the independence in an elaborate way. What are they celebrating? Our foolery? Nobody is happy. They say a fool at 40 is a fool forever and we are 56 years old. Are we not a fool forever already? Things are very bad in the country and it is so sad. We are not happy and that is the simple truth. There is nothing worth celebrating in Nigeria at the moment. In fact, instead of celebrating the independence, I would advise Nigerians to embark on a dry fast all through today and pray to God because at this point, it is only God that can save us. While growing up they always said, ‘Nigeria go better,’ now we are grown up and have children and we are still saying the same thing. When would things be better in this country? They say the children are the future leaders of tomorrow, yet there is no room for the youths to lead; they refuse to give the youths a chance to serve. It is crazy.”

Like his colleagues, African China, does not believe the independence is worth celebrating. In a chat with Saturday Beats, the singer said that things are very tough in Nigeria at the moment and it seems there is no hope for the common man.

“This independence is not worth celebrating and my reason is simple, there is an adage that says a fool at forty is a fool forever and Nigeria is 56 years old. It has surpassed that age limit. You don’t celebrate fools or underachievers. We only celebrate success stories. So far, what success story has come out of Nigeria? If you are successful, people would always want to associate themselves with you but it seems Nigeria is not trying its best to succeed so that other nations can associate themselves with us. If you travel to other African countries, they don’t want to associate themselves with Nigerians and it is because of the perception they have of this country. I would have advised that people should go about their normal duties today and keep facing the hardship. There is no hope, everything just keeps getting worse; there is no hope,” he said.