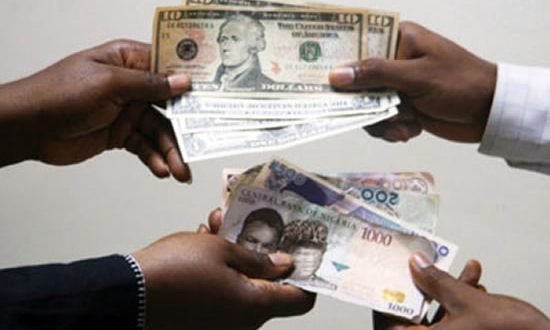 Naira falls against dollar at 428 after MPC decision

September 22, 2016 Comments Off on Naira falls against dollar at 428 after MPC decision 16 Views

The naira recently fallen against the United States dollar to 428 on Wednesday, down from 424 on Tuesday, as persistent dollar shortage continues to weigh on the economy.

The major decline in the local currency against the greenback came a day after the Central Bank of Nigeria’s Monetary Policy Committee retained the benchmark lending rate at 14 per cent.

The MPC had risen from its two-day bi-monthly meeting and left the Monetary Policy Rate unchanged, contrary to calls for its reduction by analysts, stakeholders and some government officials, including the Minister of Finance, Mrs. Kemi Adeosun.

At the interbank official market, the local currency dropped to 310.08 on Wednesday, down from 307.25 on Tuesday, according to data on the FMDQ OTC platform.

Some foreign exchange analysts believe the decline in the value of the naira has nothing to do with the MPC decision to leave the lending rate unchanged.

They said the decline in the value of the naira against the US currency would have been more significant if the MPC had announced a cut in the MPR on Tuesday.

“The developments in the official and parallel markets are a reflection of the usual pressure on the naira. It has nothing to do with the MPC’s decision to leave the interest rate unchanged. We would have seen a major decline in the naira if the committee had announced a rate cut,” a currency analyst at Ecobank Nigeria, Mr. Kunle Ezun, said.

“We can see that the dollar-naira exchange rate has been stable over time now. It is partly because the CBN has been able to meet its futures obligations. It has brought some relative calmness to the market. Again, the demand for forex by players in the oil and gas sector has been taken from the interbank market. This has also brought calmness to that market,” he added.

Meanwhile, the CBN said on Wednesday that interest rate cut alone would not help to pull the economy out of recession amid rising inflation.

He told Channels TV, “It’s not sufficient for the monetary policy committee to just meet and say we are reducing interest rates to address a stagflation.

He said Nigeria’s policy rate had been stuck at six per cent in the past but it didn’t spur credit growth, because the banking system did not respond to the move.

Tule explained that inflation was rising not due to excess money supply, but because of recent reforms, which included a hike in electricity tariffs, fuel price and a currency float that led to a 30 per cent drop in the value of the naira in one day.

“If we were merely in a recession, then we could say we would spend our way out of the recession. For an economy like Nigeria, where there are key structural deficiencies, there’s an urgent need to harmonise the policy mix,” Reuters quoted him as saying.