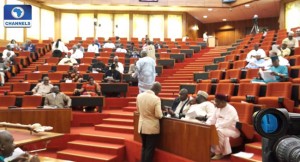 The Nigerian Senate says it will investigate the alleged earth tremor that happened in Kaduna State on Monday.

Senate President, Dr Bukola Saraki, gave the assurance while addressing reporters at his residence in Ilorin on Tuesday where he was to celebrate the Eid-el-Kabir.

He said that the legislative chamber would invite relevant agencies to enlighten Nigerians on their preparedness in case of higher occurrence of the tremor.

There were reports on Monday that a fresh earth tremor had occurred at Sambang Dagi community barely 24 hours after a similar incident was recorded at Kwoi village both in Jaba Local Government Area of Kaduna State, in Nigeria’s North-West region.

According to an indigene of the area , vibration occurred very early in the morning on Monday, leaving residents scampering for safety.

There were also concerns that the earth tremor could destroy several artifacts that are located in Nok community.

The town of Nok is barely four kilometres from Kwoi where the local government secretariat of ‘Jaba’ is located, while Sambang Dagi is about 20km away from Nok.

Meanwhile, the Kaduna State Emergency Management Agency has said that no life or property was lost from the earth tremor that occurred at Kwoi community.

Instead, he explained that the earth tremor occurred twice only in Kwoi community on Saturday and in the early hours of Monday morning.