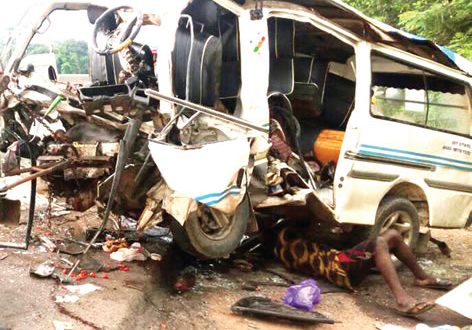 No fewer than five people lost their lives yesterday and 15 others injured as two vehicle collided in Lagos- Ibadan express road.

According to eyewitness, it was gathered that the Mazda bus who was on high speed tried to overtake  at an intersection where construction works were being done on the road lost control and crash into the oncoming space wagon car.

The five victims comprised the drivers of the two vehicles, and three passengers in the bus, including a child.

While the remains of the victims were deposited at the SOS Mortuary, Ipara, our correspondent learnt that officials of the Federal Road Safety Corps took the injured to Ife-Oluwa Hospital and Ibadan Centre Hospital.

The incident was the cause of major gridlock on the express road yesterday but the FRSC was able to clear the road to allow free movement and passage of the vehicles plying the road.