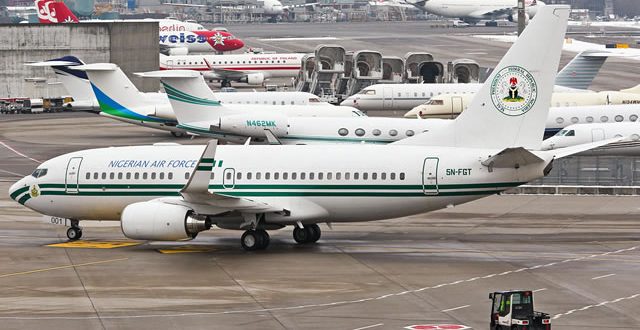 September 10, 2016 Comments Off on FG spends N5bn on Presidential fleet in 15 months 9 Views 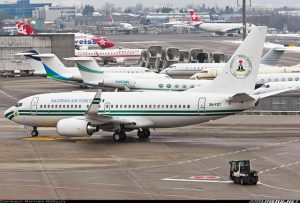 Despite the biting economic recession in the country, the Federal Government has spent the sum of N5bn on the 10-aicraft Presidential Air Fleet in the last 15 months, document obtained exclusively from the Presidency by Saturday punch has revealed.

According to the document, the Presidency put the amount of money so far released for the Presidential Air Fleet since the inception of the current administration in May 2015 till date in the region of N5bn.

The breakdown of the sum showed that N2.3bn was released for PAF by the Office of the Accountant-General of the Federation between May and November 2015.

That figure included releases for personnel costs, overheads and capital expenditures; out of the N5.19bn appropriated for PAF in the 2015 budget.

Of the sum, the Presidency said N99.715m was spent on aircraft maintenance, spares and subscription services.

The sum of N98.5m was also spent on operations; N165.373m on training and N85.5m on personnel medicals and overheads.

During the period, the document claimed that PAF spent N1.350bn to settle outstanding liabilities carried over from 2014 while N500m was refunded to the NSA for financial support rendered for the maintenance of the Fleet prior to release of funds.

According to findings from aviation experts, however, the Federal Government may have spent about N19.9bn on the 10-aircraft PAF in the last 15 months of President Muhammadu Buhari’s administration.

The large-size PAF inherited from the former President Goodluck Jonathan’s administration is the second largest airline in the country, coming after Arik Air which has 23 aircraft in its fleet.

According to experts’ estimated projections of expenses made in line with the cost of running and maintaining airplanes, about $65.13m (N19.9bn), using the official exchange rate of N305.5 per dollar, may have been spent on the 10-aicraft presidential fleet between May 29, 2015 and August 29, 2016.

According to the Presidency, the PAF contains 10 aircraft. These are: Boeing Business Jet (Boeing 737-800 or AirForce One), one Gulfstream 550, one Gulfstream V (Gulfstream 500), two Falcons 7X, one Hawker Sidley 4000, two AgustaWestland AW 139 helicopters and two AgustaWestland AW 101 helicopters. Each of the two Falcon 7X jets were purchased in 2010 by the Federal Government for $51.1m, while the Gulfstream 550 costs $53.3m, a former Minister of Information, the late Pro. Dora Akunyili, had said.

According to airline chief executives and industry experts, airlines spend between 15 and 20 per cent of the cost of an aircraft on its operation yearly.

They explained that averagely, a little less than one-fifth of the cost of the plane is spent every year on insurance, flight and cabin crew, maintenance, fuelling, catering and training.

A quarter of the annual maintenance cost ($52.11 or N15.92bn) would also have been spent to maintain the 10-aircraft in the presidential fleet in three months after May 29, if the Federal Government followed experts’ recommendation on maintenance of its air fleet.

This means that between June and August this year, an additional $13.02m (N3.98bn) would have been spent in principle to maintain the 10-aicraft presidential fleet.

Though the amount ought to have been N12.8bn, the depreciation of the naira from 197/dollar to 305.5/dollar at the official interbank market raised the amount to N19.9bn. This indicates an increase of 45 per cent.

Aviation experts told Saturday PUNCH that depreciation in naira value had made the cost of maintaining airplanes to go up astronomically.

This, they argued, was because airline and aircraft maintenance expenses were denominated in dollars.

They therefore urged the President o reduce the size of the PAF as soon as possible.

The General Secretary, Aviation Round Table, an industry pressure group, Group Captain John Ojikutu, said Buhari needed to reduce the PAF and sell aircraft belonging to most of the Ministries, Departments and Agencies.

He said, “It is high time the Presidency reduced the number of aircraft in that fleet. We can’t be spending our scarce forex to maintain a large fleet of 10 aircraft.”

A few weeks after his inauguration, Buhari had reportedly ordered the immediate disposal of some of the planes in the PAF.

However, the Senior Special Assistant to the President on Media and Publicity, Garba Shehu, later denied knowledge of such directive.

“The story of the order for the sale of aircraft in the Presidential Fleet, about which so much interest is being expressed, is not known to us,” Shehu had said.

Other aviation experts and Nigerians had called on the President to reduce the fleet.

A former Assistant General Secretary, Airline Operators of Nigeria, Mr. Muhammed Tukur, said the aircraft could be sold to both airline operators and private individuals who could use them for commercial purposes.

He said that this could generate more revenue and create jobs.

Nigeria happens to be one of the few countries with a large PAF.

Most major countries in Europe and Asia maintain two aircraft in their PAF. According to Wikipedia, Japan maintains only two Boeing 747-400 planes in its PAF.

Netherlands government operates only two aircraft, a Fokker 70 and Gulfstream IV to transport the Dutch Royal family and government officials such as the Prime Minister and other ministers.

The Queen of England and the UK’s Prime Ministers often go on British Airways chartered flights for long trips.

Countries like Ghana, Algeria and a host of others in Africa maintain only one aircraft in their PAF.

Reacting to the development, Chairman, Coalition Against Corrupt Leaders, Mr. Debo Adeniran, said spending a whopping N5bn on maintenance of 10 aircraft at a time when many states “cannot pay salaries and dozens of families going hungry across most parts of the country is insensitive and a hallmark of an anti-people regime.”

While condemning the All Progressives Party-led Federal Government for engaging in the same ‘sins’ it accused the ousted Goodluck Jonathan’s administration for, Adeniran said the high level of waste on the part of the government in the face of hunger wasn’t what Nigerians yearned for while electing Buhari.

He said, “Spending that type of money on maintenance of aircraft is not the best at this time. It is profligacy, it is unnecessary and smacks of insensitivity on the part of the regime that is supposed to effect positive change in the lives of the people.

“A few days ago the Federal Government launched the ‘Change begins with me’ campaign but I disagree with the government that because it is like shifting the goalpost to Nigerians. This administration has not shown us that it has good plans. All the policies that have been implemented so far – both fiscal and monetary – are anti-people. This is not the type of government that we yearned for.

“They criticised Goodluck Jonathan of keeping a large fleet of aircraft but they are also doing the same thing. I think Buhari is alone in his anti-corruption fight because most of his cabinet members have not been able to detach themselves from the lifestyle of the past regime.

Meanwhile, on Thursday, Senior Special Assistant on Media and Publicity to the President, Presidential Garba Shehu, hinted that there was a committee already deliberating on trimming the presidential fleet.

He made the revelation in a reaction to a tweet by blogger, Japheth Omojuwa, who asked why the Presidency has yet to reduce the 10 aircraft on its fleet.

“There is a government committee already in place, working to reduce the number of aircraft in the presidential fleet,” Shehu said.

Share
Previous I Didn’t Have Any Affair With Onyeka Onwenu – King Sunny Ade
Next Patience Jonathan Claims Ownership Of $31.4m Frozen By EFCC