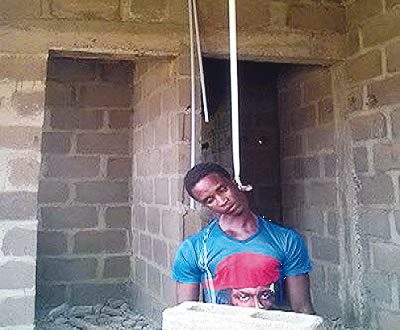 Man hanged himself in an uncompleted building

September 6, 2016 Comments Off on Man hanged himself in an uncompleted building 511 Views

He said, “We received the report in the early hours of Sunday. The victim was brought from another place to the uncompleted building. He was strangled before he was thereafter hanged with a rope to give the impression that the deceased committed suicide.

“There were marks of violence on his body, which made the police believe that the case was a murder case and not suicide. Policemen were at the scene, took photographs and removed the body. We are looking for his family members.”

A resident, who gave his name only as Usman, however, said some people believed that Tunde committed suicide.

He said, “The man did not live on this street, but some people know him. They said he had been having some family issues because of lack of money.

“The death is believed to have come from frustration and lack. But the police should do their job thoroughly and unravel the cause of his death.”

Efforts by our correspondent to get Tunde’s house address or family members were not successful as of press time.

The Lagos State Police Public Relations Officer, SP Dolapo Badmos, confirmed the incident. She added that the police would unravel the perpetrators of the crime.

She said, “Operatives of the division are going to unravel the cause of death and the perpetrators of the dastardly act. His age and surname have yet to be known.

“But we have recovered the body and deposited it in a public morgue for autopsy. The case is under discreet investigation.”