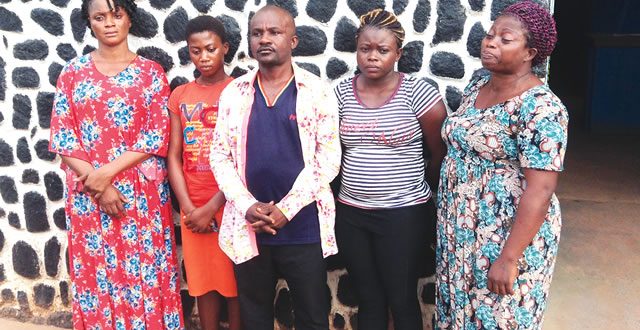 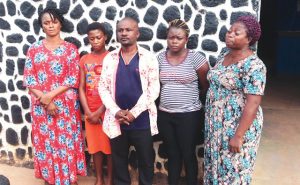 The Police have arrested members of a syndicate, which specialized in stage-managing miracles and confirming fake prophecies for pastors.
Punch newspaper reports that the group also faked healings for some men of God, who contracted and paid them for their services.
The suspected fraudsters were identified as Obi Ejike from Ubaho Okija in Anambra State; Mary Kuku from Ijebu Ode, Ogun State; Joy Oluwakemi from Ojo, Lagos State; Nwosu Chizoba from Umunze, Anambra State; and Peter Uchechi from Ebonyi State.
They were reportedly apprehended while on their way to Abakiliki, Ebonyi State, where they were contracted to stage phoney miracles and healings for an unnamed pastor in the state.
PUNCH Metro learnt that the suspects were apprehended on Friday during an argument while waiting to board a vehicle at Holy Ghost Park, Enugu.
The Police Public Relations Officer, Enugu State Police Command, Mr. Ebere Amaraizu, who confirmed the development on Sunday, explained that the argument among the fraudsters drew the attention of some policemen within the premises of the park, who interrogated them.
Amaraizu said two members of the syndicate, Ejike and Oluwakemi, opened up on the group’s activities.
Revelations made by the duo led to the arrest of other members of the group at P and T bus stop, Enugu, on Saturday, where they had assembled to board a bus to Abakiliki, the venue of a church service.
A member of the group, Uchechi, said they were usually recruited in large numbers and kept in a house from where they would shuttle to confirm fake prophecies and stage-manage miracles for pastors.
Uchechi said they were usually paid through a coordinator, who acted as a middleman between the syndicate and the pastors.
Upon their arrival in the church, a man, who works for the pastor, would instruct the syndicate on the nature of the assignment.
Uchechi explained that before the scheduled church service, they would list their names and the fake ailments they had, which would be given to the pastor while ministering to the congregation.
During the ‘prophetic hour’ session of the service, members of the syndicate, who were already known to the pastor, would come out when people who had problems were summoned to the altar.
Subsequently, members of the syndicate would announce before the congregation that they had received healing following the pastor’s ministrations.
In other cases, according to Uchechi, members of the syndicate would come out to ‘confirm’ a prophecy, which would be made by the pastor in the course of the service, based on the information they provided before the session.
She added that the members of their group usually fell under the ‘influence’ of the pastor’s anointing, during worship sessions.
“Some pastors use us to grow their churches and ministries and we are paid later through our coordinator, depending on our roles,” Uchechi said.
Ejike, who explained that he worked with the coordinator, admitted that he was in charge of the Abakiliki job, which the group was going for when they were apprehended.
He said he decided to go into the fake prophecy business after his business collapsed in Lagos.
Ejike added that he was mostly involved in the recruitment of personnel for various assignments.
Another member of the group, Chizoba, said she started the ‘business’ in Abuja, after finding it difficult to fend for her baby, who she had out of wedlock.
According to her, she eventually relocated to Onitsha, Anambra State, to team up with the syndicate.
Two other members of the syndicate, Oluwakemi and Kuku, claimed to be widows with four children each, adding that hardship pushed them into the crime.
The police spokesperson, Amaraizu, said investigations were ongoing.
Source: The Punch newspaper