My records Are Clear, I serve Nigeria Diligently Says Jonathan

August 19, 2016 Comments Off on My records Are Clear, I serve Nigeria Diligently Says Jonathan 9 Views 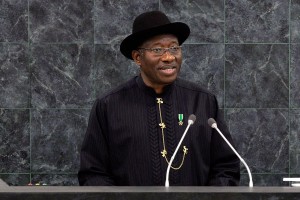 Former President Goodluck Jonathan on Thursday said some people are out to bring him down despite his diligent service and commitment to the country.

Jonathan reacting through a press released signed by his media adviser, Ikechukwu Eze to a report linking him with militancy in Niger Delta regions said some characters are hell bent to pull him down because of his rising national and global recognition which he has been accumulating.

Jonathan said some people who have “scores to settle” with him are feeling frustrated by his rising profile within and outside the country.

“Some misguided characters are hell-bent on pulling down the former president, despite his clear record of diligent service to his country and longstanding commitment to the good of society,” read a statement issued on behalf of the former president by Ikechukwu Eze, his media aide.

“There is no doubt that there exists such people who may have scores to settle with the former President but are now feeling frustrated by the fact that his national and international profile has continued to rise, despite their recourse to muckraking and character assassination.

“Such people will stop at nothing to continue to throw obstacles, albeit futilely, on his path.”