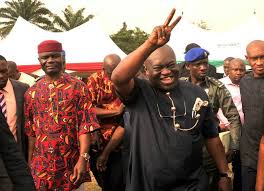 The appeal court sitting in Abuja has upheld appeal of Governor Okezi Ikpeazu against the nullification of his election by Justice Okon Abang of federal high court.

The five man panel of the court led by Morenikeji Ogunwumiju on Thursday said the lower court made a “summersault” when it gave a judgement that had already been transmitted to the appellate court.

Delivering the judgement, Justice Philomena Ekpe said the lower court had no business in entertaining further applications on the matter.

“From the above submission the said issue hereby resolved in view of the appellant against the first respondent. Consequently this appeal is deemed meritorious and it is hereby allowed,” She said.

“The decision of the lower court delivered 28th July 2016 is hereby set aside and the cost of N100,000 is hereby awarded in favour of the appellant.”

This is the fourth ruling in the six appeals against the judgment of Okon Abang which nullified the election of Governor Ikpeazu.