August 17, 2016 Comments Off on PDP Convention: We Dont Know Which Judge To Obey Says INEC 32 Views 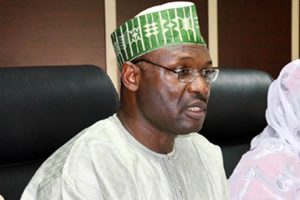 The leadership of the Independent National Electoral Commission on Tuesday was confused on whether to monitor or stay away from Wednesday’s (today) national convention of the Peoples Democratic Party in Port Harcourt, Rivers State.

Justice Okon Abang of a Federal High Court in Abuja on Tuesday had insisted that the PDP must stop its planned national convention.

The judge gave a stern warning to the Chairman of INEC, Prof. Mahood Yakubu, not to monitor the convention. The judge also ordered the Inspector-General of Police, Ibrahim Idris, to enforce the court’s order.
Justice Abang’s order is contrary to another order by Justice Ibrahim Watila of the Port Harcourt Division of the Federal High Court, directing the IGP to monitor the convention.

Warning that the disobedience of court orders could cause anarchy, Justice Watila pointed out that the National Caretaker Committee of the PDP remained the executive authority in all matters concerning the party.
Our correspondent, who visited the headquarters of the commission in Abuja on Tuesday, was told by some national commissioners that INEC was in a dilemma over which order of the different courts it should obey concerning the convention.

It was learnt that the commission had sent a delegation to Port Harcourt, based on the Rivers State court ruling, mandating it to monitor the convention.

The ruling of Justice Okon Abang on Tuesday, insisting that INEC must stay away from the convention, was said to have put the commission in a dilemma over what to do.

One of the national commissioners, who spoke on condition of anonymity, said while the commission was willing to obey court orders, the two judgments had put it in a state of confusion.

He said, “ We have just been told that we should not be at the convention on the order of Justice Abang. Yet, another court in Port Harcourt said we must be there. These are same courts with same powers under the same President, because the Federal High Court in the country is headed by a President.

“Are these judges reading different laws or constitution? Can’t the President of the Federal High Court call his men to order?

“If we go to Port Harcourt for the convention, a judge will say we flouted his order and if we don’t go, another one will frown at our action.”

“In the meantime, our monitoring workers are on standby.”

Don’t monitor PDP convention, judge warns INEC
Justice Abang had on Tuesday turned the interim order, stopping the PDP national convention, into an interlocutory injunction that would subsist till when the substantive suit was determined
He adjourned the hearing of the case till September 7, 2016, but gave a stern warning to INEC chairman not to monitor the convention

The judge also ordered the Inspector-General of Police to enforce his order.
Justice Abang, who faulted the decision of the Port Harcourt Division of the Federal High Court to assume jurisdiction on the case relating to the PDP convention, also directed that his order be endorsed with Form 48 (notice of disobedience of court order) and served on INEC chairman.

Justice Abang said failure by INEC or any of the defendants to comply with his order would ‘‘attract disciplinary action provided the plaintiffs know what to do.”
He said the Ahmed Makarfi-led caretaker committee members, who were on Tuesday joined as the third to the ninth respondents, adopted a strategy of not filing a counter-affidavit, adding that other processes were not found in the court file.

“They must sink and float with their legal strategy,” the judge said.
Justice Abang said the request for an adjournment by their counsel, Mr. Yunus Ustaz (SAN) and Chief Ferdinand Orbih (SAN), after the plaintiffs’ counsel, Chief Adeniyi Akintola (SAN), had moved a motion for an interlocutory injunction, was an afterthought.

Justice Abang ruled, “ The facts deposed to by the plaintiffs are credible and deserving to be granted the application in the overall interest of justice. I so hold…

“I make the following orders:
“An order of interlocutory injunction is hereby made restraining the defendants (the nine of them), their servants, agents, howsoever named from conducting the national convention of the PDP and from supervising or monitoring same under any guise and for electing any national officer of the (second) defendant (PDP), and for recognising same in any manner whatsoever, pending the determination of the substantive suit.

“An order of interlocutory injunction is, hereby, made restraining the PDP from presenting anybody and from sponsoring anybody for election into its offices and holding national convention, conference, whatever name for the purpose of electing national officers of the second defendant, pending the determination of this suit…

“An order of interlocutory injunction is, hereby, made restraining INEC from monitoring the national convention of the PDP scheduled for Port Harcourt on Wednesday, August 17, 2016, or any other day and from accepting, publishing or recognising, conference or convention howsoever named being planned by the second defendant.
“The Inspector-General of Police shall enforce the order until all applications are disposed of.

“The plaintiffs shall endorse Form 48 and serve all the defendants, especially INEC, to accompany the order.
“Learned counsel for INEC shall inform the chairman of INEC of the court’s decision and failure to comply with the order of the court will attract disciplinary action against any party in disobedience, provided the plaintiffs know what to do.

“Any party that fails to comply with the subsisting order of this court shall have himself to blame. Nobody should bring himself into direct confrontation with this court.”
The judge blamed the Port Harcourt division of the Federal High Court for the conflicting orders.
He said the attitude of his colleague had been condemned by the Supreme Court in 2004.

“This unenviable situation would have been avoided if the judge in the Port Harcourt division of the court had refused to assume jurisdiction over a case filed on August 9 after the Abuja division was already handling a similar case filed in July.

He said, “Therefore, the Port Harcourt division of the Federal High Court cannot make an order neutralising the order made by this court.”

Justice Watila said, “This court will not shy away from protecting the sanctity of its judgment. The court has held that the appointment of the PDP National Caretaker Committee is valid.
Justice Watila stated that court records showed that the proceedings and order of August 10, 2016, and the interlocutory injunction of August 15, 2016, were served on the defendants with proof of service.

Warning that disobedience to court orders could cause anarchy, Justice Watila stated that the National Caretaker Committee of the PDP remained the executive authority in all matters concerning the party.
PDP convention’ll hold, Wike insisits

THE Chairman of the National Convention Planning Committee of the Peoples Democratic Party and the Rivers State Governor, Chief Nyesom Wike, said despite the ruling of a Federal High Court in Abuja, the party’s convention would hold.

Wike described the verdict of the court in Abuja on Tuesday as an interlocutory injunction, adding that a Federal High Court in Port Harcourt had earlier on the same day delivered a judgment that the PDP convention should hold.
The governor explained that the leadership of the PDP was in Port Harcourt, maintaining that nobody could scuttle the democratic process in the party.

“The PDP is ready for its national convention. Based on the court judgment of July 4, 2016, we are going ahead with the convention.

“The judgment of the Federal High Court in Port Harcourt today says the national convention should go ahead. We are also aware that the judgment of the Federal High Court in Port Harcourt also validates the judgment of July 4, 2016.
“Again, what the Abuja court only gave was an injunction and the court in Port Harcourt gave a judgment that the PDP convention should hold on August 17, 2016,” he said.
‘I’ll report corrupt judges to NJC, CJN’
Sheriff, the factional chairman of the PDP, said he would send a petition to the Chief Justice of Nigeria, Mahmoud Mohammed, and the National Judicial Council against some judges of the Federal High Court in the country.
He alleged that some of the judges had demonstrated “unethical behaviour.”
He alleged that the unnamed judges ought to be removed from the system in order to restore sanity to Nigeria’s judiciary.
Sheriff spoke at an emergency press conference in Abuja on Tuesday

He said he was shocked by the order issued by a Federal High Court in Port Harcourt in which Justice Watila Mohammed validated Wednesday’s (today) national convention in the state on the grounds that the July 4, 2016 ruling, which upheld the decision taken at the May 21, 2016 convention, was still subsisting.
Sheriff expressed frustration and disappointment at the ruling of the Rivers court.
He said, “We are shocked with that ruling. All the judges in Nigeria are on annual vacation.
“We have been in court with all of them for the past one month on an issue that a judge went into in Port Harcourt which started on Friday. People went and filed court cases on Thursday and got an ex parte motion, which has been frowned at by the judiciary for now.
“Most stakeholders in the judiciary don’t want ex parte motion because it denies others justice.
“But let’s accept that the judge decided to do that. The life span of the ex parte motion is 14 days, which means you have time to serve the other people to respond.
“On Thursday, the judge gave an ex parte motion. The next day he converted that ex parte motion to an interlocutory order. On Monday, he sat and heard the main case to give a ruling or judgment today at 2pm without allowing us as defendants to defend ourselves.”
“This morning, when our lawyers went to court, the judge authorised all the registry staff to run away.
“Our lawyer, a Senior Advocate of Nigeria, immediately called everybody in Nigeria that the judiciary should not be destroyed. From 9am till now (4pm), they are receiving our own response to the application.
“The truth about it is that the whole thing is a hoax.”
While calling on the CJN to sanitise the judiciary, Sheriff said, “We are calling on the Chief Justice of Nigeria to look into the Port Harcourt division of the judiciary; otherwise, they will bring anarchy into this country.”
He said he would ‘‘put a formal complaint to the Judicial Service Commission. We are saying this because it is wrong; justice is for everybody.”

Though Omoni did not say whether there was any special arrangement for the PDP national convention holding at the Sharks Stadium in Port Harcourt, he maintained that lives and property must be protected.
Meanwhile, the atmosphere in Port Harcourt, the Rivers State capital, at 5pm on Tuesday indicated that all was set for the PDP national convention on Wednesday (today).

Our correspondent observed that all the hotels in the state capital had been fully booked.
At the Sharks Stadium, podiums had been mounted, while tents had also been put in place.
On major roads in Port Harcourt, there were traffic jams as delegates arrived in the state ahead of the PDP national convention.

Share
Previous Customs May Mis N1Trn 2016 Revenue .As Agency Nets N385bn, Half Year
Next I Will Not Recognize Convention Outcome- Sheriff