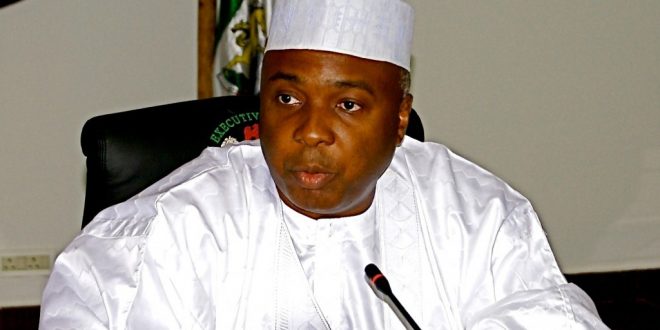 Saraki Calls For Probe Of Alleged B’Haram Recruitments In IDPs

August 11, 2016 Comments Off on Saraki Calls For Probe Of Alleged B’Haram Recruitments In IDPs 13 Views

Senate President, Bukola Saraki has called on the security agencies to probe the alleged recruitment of Boko Haram members into the Internally Displaced Persons (IDP) camps in the Northeast.

Saraki made the call on Wednesday I n a statement by his Special Adviser on Media and Publicity, Yusuph Olaniyonu, in Abuja, said it has become necessary for the nation’s intelligence outfits to take such rumours seriously with the aim of curtailing the untoward development.
“Seeing that ISIS has been recruiting members from European refugee camps, and the Kenyan government recently had to shut down the world’s largest refugee camp because Al-Shaabab was using the place to train and recruit young people as extremists, it is important that we take the rumours about Boko Haram recruiting from IDP camps seriously,” he said.
“The Senate President further reiterated his call for a more holistic investigation of alleged diversion of materials meant for the IDPs last week.
“e commended the Economic and Financial Crimes Commission (EFCC), for investigating and arresting a contractor who allegedly diverted 60 trucks of grains that were allocated to IDPs in Borno State by the Federal Government.
He said that in order to secure aid and funding from international partners, there was a need for a better coordinated response by the Federal Government to the situation in the North East.
“What is clear right now is that we cannot do this alone,” he added, “This is why we need to ensure that we put everything that we can in place to ensure that the international community is involved at maximum capacity.”
“On the arrest of the contractor, the Senate President denounced the actions of individuals who were attempting to enrich themselves off the plight of the IDPs, stating that it was unconscionable for anyone to attempt to defraud millions of displaced Nigerians in the North East that are on the verge of becoming malnourished.

“I have been to the zone twice in the past 14 months and I have experienced firsthand that the IDPs need as much food and health supplies as they can get. It is utterly immoral for someone to withhold food – in an attempt to enrich himself – while women and children are starving”, Saraki said.
Saraki added that he was already making consultations on whether or not to call a Senate public hearing to deliberate on the government’s response to the IDP crisis, which many observers have called a looming humanitarian crisis – if not properly addressed.
“If we all have to sit down with the various stakeholders at the Senate to find out what the institutional and logistical hindrances are, that’s what we are going to do,” the Senate President stated, “It is not enough for us to say that there is a problem, we need to push out solutions quickly; hunger will not wait for anyone.”
Saraki also expressed optimism on the passage of the North East Development Commission (NEDC) Bill as he said the Senate was using the period of the recess to iron out the creases needed to ensure a smooth passage of the Bill.
“I am confident that we are at the last stretch on the NEDC Bill – at least as far as the Senate is concerned,” he said, “When we return from the recess, it will be very high on our list of priority legislative interventions.