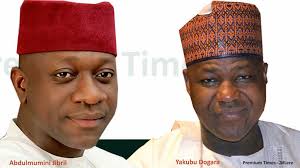 We Want To Ensure Peace Between Dogara and Jibrin- APC

August 3, 2016 Comments Off on We Want To Ensure Peace Between Dogara and Jibrin- APC 21 Views 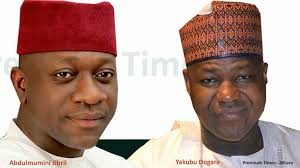 The deputy national chairman North, Senator Lawal Shuaibu has said the purpose of inviting Jibrin Abdulmumin , former chairman, appropriation committee of the house of representatives is to ensure peace among the feuding members.

Speaking after a three –hour meeting with Jibrin at the party national secretariat onTuesday, Shuaibu said they are not apportioning blame to anyone but to ensure there is peace between him and the speaker, Yakubu Dogara.
.
“We are discussing with them and it is an ongoing consultation, we are not done with them, we sat with the speaker, we just finished sitting with him and we would continue to sit with him, ” Shuaibu said.

“I, that summoned him, the national secretary of the party and the national vice chairman of his zone sat down to discuss, there is nothing like passing any judgment on any member of the party, we only play our role as the umpire in this matter to see how we can create some atmosphere of peace and unity among our members.

“I was reading today in the paper that we called him to discipline him, discipline him on what? whatever happens in the house of representatives or the senate under the constitution and their rules they are immune.”

Shuaibu said the party is hearing directly from them so as to find how it can handle the situation.

“What we did actually was that we heard from him. We have heard earlier from the speaker but because it was not in the newspapers, like you just went and published nobody knew we held a meeting with the speaker,” he said.
“I want to say what we discussed, honestly speaking was to get a better brief because we have to be carried along.”
On his part, Jibrin who refused to speak on the outcome of the meeting said he was at the APC secretariat to honour the summon of the party.

“I’m here on the invitation of our great party, the APC we discussed extensively on the crisis in the house of representatives, ” Jibrin said.

“We will continue to discuss and engage ourselves, I will continue to honour the invitation of our party and I am sure that whatever it is we decide you will know in the due course.”
Jibrin accused Speaker Dogara and other principal officers of the house of padding 2016 budget.

Share
Previous My Stomach Infrastructure Program Is A Way of Life -Fayose
Next There is Hunger In The Land, Nigerian Will Not Vote For You In 2019, Mbaka Hits Buhari