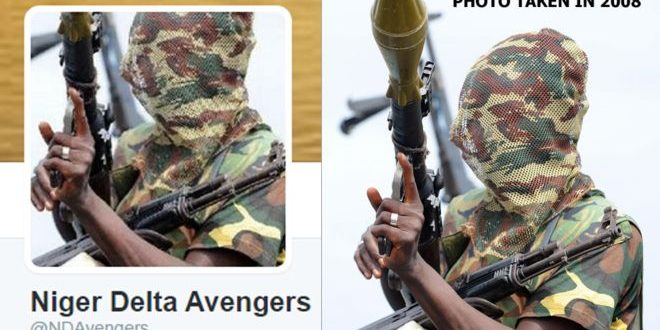 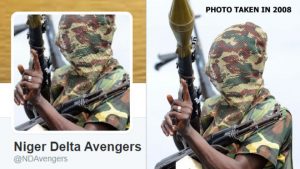 Militants of the Niger Delta Av e n g e r s (NDA) have threatened to attack expatriates and Nigerians working with oil firms in the oil-rich Niger Delta if they fail to vacate the area.

This is as the militant group, on Wednesday night, blew up other Chevron manifolds in Warri, Delta State with a promise to do more havoc to oil installations in the region. The group, which made the attack known on its website late Wednesday, said it blew up RMP 22, 23 and 24 all in Warri and warned expatriates and Nigerian workers to vacate the area, else they may lose their lives.

In the statement signed by its spokesperson, Brig- Gen. Mudoch Agbinibo, the group said: “Between the hours of 10:50p.m. and 11:10p.m. our (Niger Delta Avengers) strike team blew up Chevron Manifolds which are RMP 22, 23 and 24.”

The group, which wished its readers, a “Happy Eid Mubarak to our Muslim Brothers,” said it was closing all its social network accounts due to activities of scammers and impersonators attributing some sabotages to it.

NDA, however, denied responsibility for the alleged attack on NNPC’s pipeline at Eleme in Rivers State last Saturday and advised other groups carrying out their heinous activities to do so and be manly enough to claim responsibility instead of accusing Avengers falsely. The group, therefore, warned the media to beware of the imposters and always follow its activities only on its website henceforth.

“This Facebook Account/ page is an impostor page that was opened by fraudsters to deceive the general public. “We are warning any group that wants to do anything to go about their activities without tagging us (Niger Delta Avengers), instead do your activities and claim responsibility.

“The NNPC pipeline in Eleme explosion that was posted by this Facebook account yesterday wasn’t carried out by Niger Delta Avengers. “We are calling all national dailies to take note. Niger Delta Avengers is not out to mislead the public,” Agbinibo stated. Senior Special Assistant to the President on Media and publicity, Garba Shehu had, on Wednesday in an article, accused the group of killing soldiers and policemen to which the militants had denied.

The group also denied being in touch with the Federal Government on any proposed dialogue to end the hostilities, which have further fractured the fragile oil economy of the country amid global fall in crude oil price.

The threat is coming two days after militants, under the aegis of the Joint Revolutionary Council (JRC), threatened to carry out more attacks on pipelines and flow stations.

The militants vowed to attack the Bayelsa State Government House, should Governor Seriake Dickson fail to settle the backlog of salaries owed workers.

According to the group, these installations would be set ablaze because the oil companies were major hindrances to the development of the region. The group warned persons staying within its target areas to vacate such places to avoid any loss of lives, insisting that its mission was not to kill anybody, but to cripple the economy of the country.

The JRC said it was unacceptable for Dickson to owe civil servants and pensioners for several months without taking into cognizance the hardship these citizens were passing through during these periods.

Meanwhile, the Nigeria Security and Civil Defence Corps (NSCDC) has said that the dialogue approach adopted by the Federal Government with militants would end the ongoing bombings of oil facilities in the Niger Delta. The NSCDC Commandant General, Alhaji Abdullahi Muhammadu, gave the assurance while speaking to journalists in Minna, the Niger State capital yesterday.

“The Federal Government has commenced negotiations with some of the aggrieved militants in the region on the need to sheathe their swords and embrace peaceful resolutions of all perceived grievances that led to the bombings of oil pipelines in the region.

“To the best of my knowledge, I think the Federal Government is already negotiating with them. “At the last meeting we had, we discussed at length and, very soon, all these bombings will come to an end.

“The government is trying to negotiate with them with a view to finding out why they are doing it so as to get to the root of the problem,” he said. Muhammadu explained that the government chose the option of dialogue with the militant groups in order not to send a wrong signal to the international community on some of the happenings in the country. “You know, we are in a democratic setting, so we have to be very careful of what we do. After the first bombing, second bombing and the third bombing, we were sent there and we did our job there to find out some things.

“During the period of our assignment, we went on a fact-finding mission and we came back with some facts which I will not disclose to you now. But I am sure it will soon come to an end,” he said.