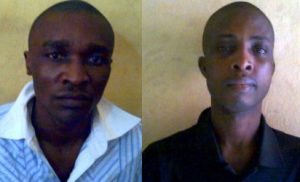 The Nigeria Prisons Service Monday in Abuja unveiled the identities of two inmates who escaped from its facility in Kuje Friday night.

Two inmates were reported to have escaped from the prison at about 1930hrs though not through jailbreak.

Enobore said the inmates in question were awaiting trial for culpable homicide and have no relationship with Charles Okah in what ever manner as its being speculated.

According to him, efforts are on in collaboration with sister security agencies and relevant bodies to recapture the fleeing prisoners.