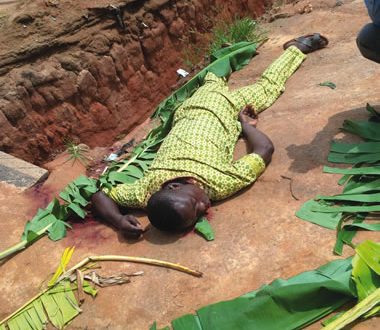 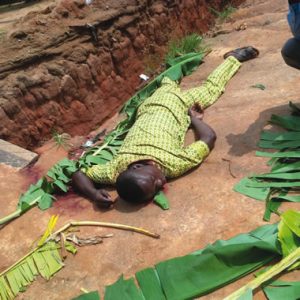 The Imushin community in the Ogijo area of Ogun State has been thrown into mourning after no fewer than 15 residents were reportedly killed on Friday evening by armed men suspected to be militants.

It was  learnt that about 100 militants, armed with guns and cutlasses, stormed the community around 11pm on Friday and embarked on a killing spree, killing every resident in sight.

When our correspondent visited the community on Saturday, he saw a few of the corpses which their families were preparing for burial in accordance with Islamic rites.

Among the 15 killed was a technician, Waheed Buhari, aka Yah Alau, who was shot dead in front of his room.

One of his children, Mariam, sustained bullet wounds.

A travel agent, Mr. Oladele Ogundare, was said to be returning home in his car, when the rampaging militants opened fire on his car and killed him.

Another resident, Umoru, who was said to be eating noodles, was chased, hacked and shot to death, along with a friend, Danladi.

A mosque in the community, was reportedly attacked and a Muslim cleric killed.

Two hotels were said to have also been raided and their customers robbed and injured.

More than 25 shops in the community were looted by the militants.

Many of the residents, who spoke with reporters begged not to be identified as the militants had threatened to return to continue the killing.

A resident told our correspondent the militants were suspected to be Ijaw youths involved in pipeline vandalism.

She explained that they were on a revenge mission as some operatives of the State Anti-Robbery Squad had killed two of the vandals earlier on Friday.

She said, “The whole thing began around 4pm on Friday. I was at the backyard of the hotel, cutting some weed when some SARS officers came in. They were shooting and ordering people to stop moving. There was confusion in the hotel.

“The SARS officials did not leave until after three hours. They killed two of the vandals and took away the owner of the hotel, a woman.

“Around 10pm, I went to urinate when I saw so many hoodlums coming from the waterside down the road. They carried sophisticated weapons and when they got here, they started shooting. They blew off the hotel windows and shot people dead. They killed two men here in Lapete village.”

A friend of Waheed, the electrician killed in Oke Muti, said the Ilorin, Kwara State indigene had tried to shut his door when the militants killed him.

His friend said, “He was going to urinate when the militants started firing. He tried to quickly shut his door, but it did not jam. They opened fire on him at the door step and did not stop until he dropped dead.

“Not satisfied, they entered his room and sprayed everywhere with bullets. Waheed’s child, Mariam, that was in the room was hit. She is still at the hospital.”

He added that the police recovered 15 corpses in the community.

The widow of the travel agent killed in the Ereko area of the community said her husband, Oladele, who worked on Victoria Island, Lagos State, had left for work in his car on Friday morning without any foreboding.

She said, “He gave me money for foodstuffs after dropping me off in front of a bank where I wanted to do a transaction. By 6pm, we spoke and he asked me to prepare rice for him that night.

“By 10pm, I called his line; it rang and he didn’t pick. I tried it again at 12am, still no response. I called his mother by 6am that I had not been able to reach him on his two telephone lines and she promised to call as well. She also couldn’t get to him.

“It was this morning (Saturday) that I saw a crowd of people in my house. They said he was a short distance from home when he was shot dead. I can’t believe this because we have barely spent a year in this community and this has never happened before.”

Some customers at the Catcher Hotel were lucky to have escaped with their lives.

However, the hoodlums carted away all the valuables in the hotel and vandalised all the electronic gadgets.

A soldier, who was not in uniform at the time of the attack, said the vandals cut him with a cutlass and smashed bottles on his head.

He said, “I had entered the beer parlour in the hotel when the militants came in. They were about 200. At first, I thought they were having a festival until they ordered all of us to lie flat on the ground.

“They asked for my two phones and when I gave them one, they became angry. One of them cut my head with a machete and followed it with a bottle. I was drenched in blood. The militants had sophisticated weapons that I had never seen before.

“They never asked for money from me and they didn’t search my pocket. If they did, they could have found my ID card and I would have been dead. I wore just a white shirt.”

A disc jockey at the hotel said one of the militants wanted to shoot him dead, but one of them persuaded him against it.

“They were arguing among themselves whether or not to kill me. One said, ‘If you don’t want me to kill him, then let me cut off his leg.’ But his colleague asked him not to.  Before I knew it, he had smashed three bottles on my head.

“They went away with my laptop, phones, money and everything I had. They refused to carry away the beers in the hotel. They took only the hard drinks,” he said.

Women in the hotel, who claimed that the militants spent about 30 minutes, said they tortured them with cutlasses and guns.

Efforts to speak with community leaders were abortive as they declined comment.

It was gathered that a community leader had been abducted by the militants a few months ago, after reporting a case against them at a station.

A source said, “The man was in the creek for 40 days. The militants collected N10m from the community before he was released. That is why everybody is afraid to talk. People have started fleeing the community. Two Hausas were killed during this attack and the Hausa community has vowed to fight back.”

A man, who spoke for the Imushin community, pleaded with the government to intervene before the community was completely deserted.

He said, “These people are militants and even the police cannot withstand their firepower. We need help from the government. We will appreciate anything they can do for us.”

He said, “Around 11pm at Ereko Community, Ogijo, some hoodlums numbering about 100 invaded the community and started shooting sporadically. Bullets hit one Waheed Buhari and his daughter, Mariam. While Buhari died, the daughter is still at the hospital. Two other unidentified corpses were found, making a total of three deaths.

“Information from eyewitnesses showed that the hoodlums were militants and they came from the riverine area. But we have not confirmed this, as investigations are ongoing. We are particularly interested in why they came in such a large number.