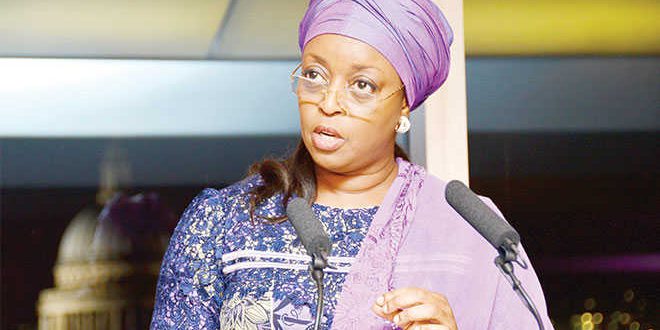 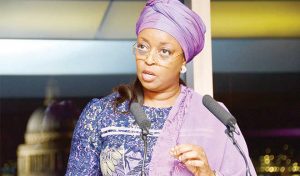 The Economic and Financial Crimes Commission has seized a mansion worth N3.58bn ($18m at the official exchange rate of N199 to a dollar) in the Asokoro area of Abuja allegedly belonging to the former Minister of Petroleum Resources, Diezani Alison-Madueke.

The acting Chairman of the EFCC, Mr. Ibrahim Magu, said this during an interview with Al-Jazeera, a Qatar-based news network.

Magu, in the interview, monitored by our correspondent on Monday, noted that the items in the house included jewellery, furniture and a bulletproof gym worth about $2m.

He  stated that the house was part of the $10bn in cash and assets that had been seized by the Federal Government in the last one year.

“We have been able to take on a lot of big shots that were hitherto untouchable in the three arms of the military, political class. We have recorded 164 convictions in just one year,” he said.

He denied claims that the fight against corruption was politically-motivated.

“No, not my EFCC; not the EFCC of today. We are not politicised. If there is an allegation against anybody, we will go after them,” he said.

The commission had revealed in April that it seized wristwatches worth £2m from the wife of the Chairman of Atlantic Energy Drilling Concepts Nigeria Limited, Mr. Jide Omokore, and Diezani.

The wristwatches were said to have been seized during various raids on houses of some suspects on Banana Island, Ikoyi, Lagos, and other places.

Meanwhile, in a statement on Monday, the spokesman for the EFCC, Mr. Wilson Uwujaren, said the commission had the right to seize properties believed to have been acquired with stolen funds.

He said, “In recent times, a lot of interest has been generated by the action of the commission in freezing the accounts of suspects that were investigated or are currently being investigated. Some commentators have tended to ascribe vindictive motives to this action.

“In order to prevent misinformation, it is imperative to explain the reason behind the commission’s actions in this regard. Freezing of accounts suspected of being used for commission of financial crimes is a mandatory investigative step backed by law.

“Indeed, Section 34 (1) of the EFCC Act 2004 empowers the commission to freeze any account suspected of being used for financial crimes.

“The section stipulates that ‘the chairman of the commission or any officer authorised by him may, if satisfied that the money in the account of a person is made through the commission of an offence under this Act or any enactment specified under Section 6(2) (a)-(f) of this Act, apply to the court exparte for power to issue or instruct a bank examiner or such other appropriate authority to freeze the account.”

He argued that the aim of these provisions was to ensure that the commission safeguarded suspected proceeds of crime pending the completion of its investigation.

In a related development, a Federal High Court in Lagos has adjourned till June 29, 2016, hearing on the seizure of assets belonging to Diezani’s associates, Kola Aluko and Jide Omokore, and their company, Atlantic Energy.

Aluko and Omokore have been accused of suspected business transactions that illegally transferred the country’s oil assets to them and their companies.

The Federal Government had approached Justice Oluremi Oguntoyinbo, seeking a global freeze of $1.8bn in assets allegedly stolen by Aluko and Omokore.

Their company was allegedly granted enormous contracts from the Nigerian Petroleum Development Company on the instructions of Diezani.

According to reports, when Diezani granted Atlantic Energy contracts through the Strategic Alliance Agreements, the company did not legally exist.

According to legal documents, Aluko and Omokore took more than $1.7bn from the Federal Government.

While Aluko is a subject of an INTERPOL investigation, Omokore had been arrested several times by the EFCC.

Some of the assets the government seeks to specifically freeze include three mansions in Los Angeles; two high-end apartments in New York City; properties in Santa Barbara, California; numerous properties in Lagos, including 43 apartments on Banana Island, 58 vehicles, the Galactica Star yacht and three aeroplanes.

A former Editor of the UK SUN, Kelvin Mackenzie, had said in his weekly column on Saturday that Jonathan had bought a property in Surrey.

He had said, “I hear the aptly named Goodluck Jonathan, the former President of oil-rich Nigeria, has bought a 12,000 square foot house on the ultra-expensive and well protected St George’s Hill estate in Weybridge, Surrey.

“I’m sure he gained his wealth legitimately but these houses are £10-£15million a pop, so, perhaps the ex-President could explain where his money came from as he has been at the forefront of the fight against his country’s corruption. Surely, it can’t all have been good luck.”

However, Jonathan, through his media aide, Mr. Ikechukwu Eze, denied the report and demanded a retraction from the newspaper.

The statement read in part, “Nothing could be further from the truth. Dr. Goodluck Jonathan takes pride in the fact that he does not have any property or accounts outside Nigeria. He stated this publicly while in office and his commitment to Nigeria’s economy remains total even after he left power.

“As the Nigerian President who signed the Freedom of Information bill into law, Dr. Jonathan is well aware that the United Kingdom is a nation with good record keeping at county and national levels and as such, it will not take a serious and responsible media long to verify ownership of property before rushing to the press with potentially libellous publications.

“It is hoped that this publication will correct its error and do a retraction and that other media will likewise follow up on this story to put the lie to the details it contains.”