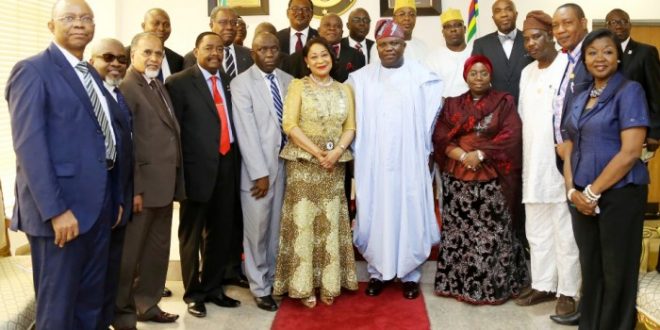 June 13, 2016 Comments Off on Lagos To Get World Class Convention Centre – Ambode 27 Views

Lagos State Governor, Mr. Akinwunmi Ambode on Monday said his administration has commenced the process of developing a top class International Convention Centre that would boost trade and investments, just as he reiterated his unwavering commitment to ensuring the ease of doing business in the State.

Governor Ambode, who spoke at the Lagos House, Ikeja when he received a delegation from the Lagos Chambers of Commerce and Industry (LCCI) led by the President, Chief Dr. (Mrs) Nike Akande, disclosed that a Memorandum of Understanding (MoU) to construct the Convention Centre has already been signed.

Governor Ambode said the Convention Centre, which would be constructed in the Victoria Island area of the State on 30, 000 square meters space, upon completion, would be of international standard and it would compete favorably with best convention and exhibition centres across the world.

While emphasizing the importance of organizations such as LCCI in growing the economy, Governor Ambode commended the leadership of the organization for partnering with the State to develop the economy, especially ensuring businesses and investments continue to thrive.

He added that the LCCI remained a veritable instrument to reach out to investors and the private sector, assuring that his government would continue to partner with the organization in the best interest of the people.

He said: “We will continue to be partners in progress and I believe strongly in improving on the ease of doing business and like we have always tried to reiterate, our administration is actually built on a tripod. First is security and we believe that if we are able to secure the lives and property of our people, we will create an atmosphere that we can actually now create job opportunities that we allow investors to come in and those local investors too.

“By so doing, we are creating jobs for our people and in creating that template and that platform, we believe strongly that our revenue will grow and in growing the revenue, we will now use it to provide infrastructure for our people and that is the platform upon which this administration is built,” Governor Ambode said.

He also said his administration is unequivocally committed to give good governance and accountability to the people, as well as allow a better platform for the private sector and businesses to thrive.

Earlier, Akande said her delegation was at the Lagos House on a courtesy visit to the Governor as part of activities to further improve on the relationship which had always existed between the State Government and the LCCI.

She commended Governor Ambode for his numerous achievements just within one year in office, saying the State was witnessing a gradual but steady rebranding for better under the Governor.

Akande, a two-term Minister of the Federal Republic, alluded to the massive donation of equipment  to security agencies, the numerous road construction and rehabilitation across the State, effective traffic and environmental management, power sector development, Light Up Lagos Project, creation of Office of Oversees Affairs and Investment, N25 billion Employment Trust Fund (ETF), among other giant strides of the Governor, saying all the initiatives were important enablers for the private sector.

“We like to commend your administration for the tremendous achievements in the last one year and it is a reflection of the clarity of vision and focus. It also demonstrates an exemplary commitment to the ideals of service. Evidently, governance in Lagos State has gained momentum in the last one year despite the downturn in the economy.

“The Governor has not only sustained the good legacies of his predecessors but he has created a new development trajectory for Lagos State. Governor Ambode’s disposition is calm and amiable; his style is effective and his approach is inclusive, while his strategy is result-oriented,” Akande said.

Share
Previous I Remain PDP Chairman Until 2018 — Sheriff
Next Electrical Engineer Is Sentenced To Death For Robbing Victim Of 180,000 Naira