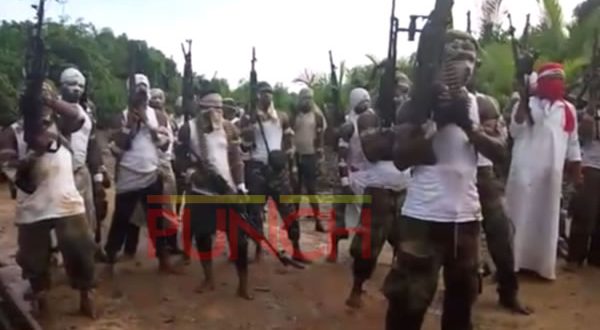 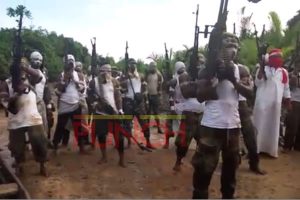 No fewer than 642 militants on Friday asked the Federal Government to reclaim the ceded Bakassi Peninsular from Cameroon.

The armed group, referred to as Bakassi Strike Force, said apart from not being carried along before, during and after the ceding process, indigenes of Bakassi had been neglected by the Federal Government and other local and international stakeholders.

The militants, also known as Esighi group, had a one-hour boat display with heavy weapons around Esighi axis of Bakassi, before proceeding to Esuk-Mba.

In a sheer display of its combat readiness, the group brandished weapons such as sophisticated gun boats, browning machine gun and rocket launchers, among others.

While admitting that they would be ready to embrace amnesty if extended to them, leader of the group, Gen. Simply, also known as Humble Lion, said the people of Cross River and Akwa Ibom states had been sidelined by the Federal Government in the amnesty programme.

Simply, who read from a prepared speech, said, “The Bakassi Strike Force is an indigenous group made up of youths from Akwa Ibom and Cross River states, totaling 642 foot soldiers. You will agree with me that Akwa Ibom and Cross River states are part of the Niger Delta region, yet we have been sidelined from the amnesty scheme and other empowerment programmes for the youth of the area.

“Yet it will interest you to note that it is in Obubra, Cross River State, that the team of Niger Delta militants were hosted, when Bayelsa, Delta, Rivers, Edo and Ondo states refused to host the rehabilitation camp for the militants.

“Again, the Federal Government took away our oil rich Bakassi from us and handed it over to Cameroon. We, as indigenes and habitants, were not consulted before this was done; neither was there any constitutional resettlement process initiated for the displaced persons.

“To make matters worse, after taking over our land, the Cameroonian forces began to harass and molest our people. They even levied us with heavy taxes which became entirely unbearable.

“Therefore, when it became obvious after several petitions that the federal and state governments were not ready to protect us and even the United Nations, we invited our Ijaw brothers who were already in the arms struggle to resist the Cameroonian operatives, but unfortunately, they embraced Federal Government amnesty programme when it was offered and abandoned us.

“As indigenous youths, we have no other option than rise to defend ourselves from the oppression and injustice from the Cameroonian forces. The Federal Government should reclaim Bakassi from Cameroon.”