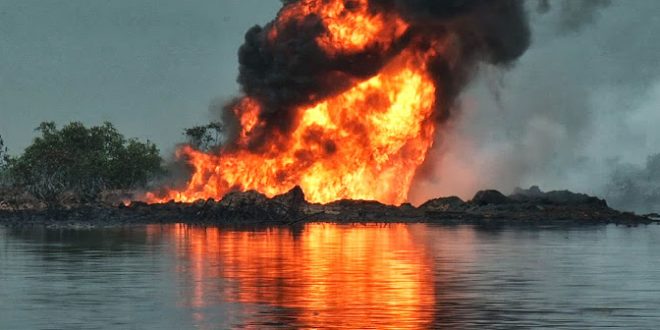 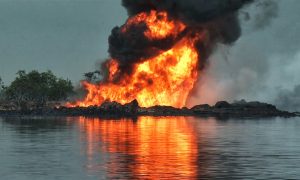 Among those seized were a notable leader in Ogulagha Kingdom, Chief Peter Tuasinde; chairman of Ogulagha community, Captain Prebor Solomon and Public Relations Officer of the community, Henry Agedigba, who went to find out from the Joint Task Force, JTF, in the Niger Delta, why they raided the community and apprehended his kinsmen.

Also arrested were a staff of S. J. Abed Catering Company in Forcados Terminal, Mr. John Borme; a businessman, Mr. Clement Ibada, and Ejor Burutu, who reportedly showed them the houses of persons they mentioned. Vanguard learned that soldiers of the JTF invaded the community at 8.20 a.m on suspicion that some members of the community were involved in blowing up the crude oil pipeline.

Niger Delta Avengers claimed responsibility for the attack on the Forcados 48″ export line, saying it was because the company acted against its warning not to repair the facility, earlier bombed by the militant group

FG should not dialogue with Avengers —Ex-DWSC

Similarly, former chairman of Delta Waterways Security Committee, DWSC, and Niger Delta activist, Chief Ayiri Emami, told Vanguard, yesterday, that Niger Delta Avengers were a bunch of criminals, and asked government, contrary to the opinion of some South-South leaders, not to negotiate with criminals.

“Why should they negotiate with criminals, if they are talking about neglect in the Niger Delta, all the ethnic groups are neglected and they have issues.  So, if the government wants to dialogue, it should not be with criminals who are bombing pipelines, it should be on the basis of underdevelopment affecting the respective areas “We, the Itsekiri ethnic group, have our own problems, but that has not made us to go and bomb pipelines.

For instance, the Export Processing Zone, EPZ, is there and nothing is going on, we are neglected, there is no development. So I am against dialogue with criminals.”

Our people are not Avengers  —Ogulagha youth leader

Chairman of the umbrella body of Ijaw Youths Council, IYC, clan structure, Doubra Collins Okotete, who confirmed the arrest of the six persons, condemned what he described as “harassment, intimidation and arrest of innocent people.”

He said: “They arrested them over allegation of being involved in the recent attack on SPDC-owned export line. I want to tell you that over 50 years of oil exploration and exploitation in our community, our people have always cooperated, supported and created the enabling environment for peaceful operations, despite the marginalization shown to our people by these multinational oil companies.”

Condemning the attacks on oil installations across Niger Delta by Niger Delta Avengers, Okotete called for the JTF to release the people arrested at  Ogulagha and “correct the anomalies done to our people because Ogulagha man is not involved in such act.

“We have had issues with our visitors, that is the multinational oil companies, before and we have our own way of expressing our displeasures, not resorting to destroying our own facilities.

“No ransacking was done, no arms or incriminating materials were found with them. Some of them were already on their way to church before they were arrested.” Oporoza, 24 hours after military exit

Meanwhile, Oporoza, the traditional headquarters of Gbaramatu Kingdom, vacated by soldiers after a six-day siege, last Friday, is still a shadow of itself 24 hours after, and it seemed it would take a longer time for normal life to return. Vanguard on its visit to the community, observed that the regular stop-and-search along the waterways has stopped but commuters, especially those from Ogbe-Ijoh market waterside to Oporoza and its surrounding communities, still travel with their hearts in their mouths.

The journey, which lasted 55 minutes, was smooth, calm and devoid of any military checkpoint on the waterways. Returnee residents were apprehensive when they saw a group of journalists and they only started coming out in trickles moments after.