Real Madrid were crowned champions of Europe for the 11th time after beating Atletico Madrid in a dramatic penalty shootout in Milan. 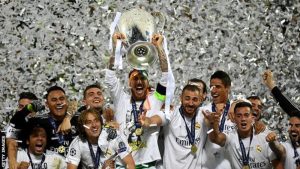 However, substitute Yannick Carrasco sent the Champions League final into extra-time with a close-range finish.

Cristiano Ronaldo struck the winning penalty after Juanfran had missed.

How the penalty shootout unfolded

In the shootout, Lucas Vazquez, Marcelo and Gareth Bale scored for Real, with Griezmann, Gabi and Saul Niguez replying to make it 3-3.

After Ramos stepped up to make it 4-3, Juanfran hit the post, leaving Ronaldo with the chance to win the cup.

The competition’s all-time leading scorer kept his composure to win it – his third individual Champions League triumph following on his from his successes with Manchester United in 2008 and Real in 2014.

Zidane, a Champions League winner with Real as a player in 2002, replaced Rafael Benitez as manager at the Bernabeu in January, with Real still reeling from a bruising 4-0 hammering by Barcelona earlier in the season and facing the prospect of a second successive campaign without major silverware.

The 43-year-old finishes it as the seventh different manager to deliver a European Cup to Real.

As stylish as his side were going forward, they were just as impressive at the back as Atletico’s attacking duo of Griezmann and Fernando Torres were starved of service before the interval.

Bale and Ronaldo repeatedly dropped back into midfield to help cut out the supply routes to Griezmann and Torres, while Karim Benzema also typified Real’s work rate by doing his defensive duties.

Atletico were the better side after the break yet fortune was on Real’s side as Pepe’s rash challenge on Torres went unpunished and Stefan Savic stabbed another golden chance wide.