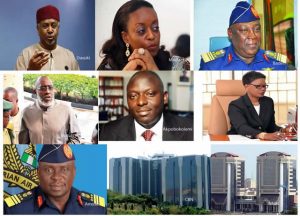 Nigeria has lost over N38tn through mismanagement, embezzlement and money laundering under successive administrations since democracy returned in 1999, estimates made by SUNDAY PUNCH have shown.

The figures were drawn from findings by anti-graft agencies and investigative panel reports on major economic scandals and financial crimes in the country in the last 17 years.

The investigation, which covered the Olusegun Obasanjo, Umaru Yar’Adua and Goodluck Jonathan-led administrations, showed that most of the stolen funds have not been accounted for.

Of the over N39tn lost in the country’s economy, crude oil theft, official corruption and electoral campaign funding were responsible for a larger percentage of the loss.

Former Governor of the Central Bank of Nigeria, Mr. Lamido Sanusi, now the Emir of Kano, Alhaji Muhammadu Sanusi II, had written former President Goodluck Jonathan, accusing the Nigeria National Petroleum Corporation of failing to account for $49bn revenue, which should have been remitted to the Federation Account.

He recently said the corporation could only account for $29bn of the ‘missing’ fund. He said some oil companies paid taxes and royalties in oil, and the NNPC sold this oil on behalf of FIRS.

“No reasonable explanation for $20bn (NNPC);  $6bn was with Nigerian Petroleum Development Company ( a subsidiary of NNPC)  that had not got to the Federation Account to date,” Sanusi said.

In the course of investigating the alleged diversion of $2.1bn arms cash placed under the Office of the National Security Adviser, then headed by the immediate past NSA, Col. Sambo Dasuki (retd.), the Economic and Financial Crimes Commission had discovered that the total anti-Boko Baram insurgency money diverted by various personalities and agencies was over $15bn (N2.3tn).

A former Governor of the Central Bank of Nigeria, Prof. Chukwuma Soludo had in 2015 challenged the then Minister of Finance, Dr. Ngozi Okonjo-Iweala, to give account of the N30tn allegedly stolen under her watch.

The former apex bank boss had alleged that the nation was in for a chaotic time as the economy had been grossly mismanaged by the minister. He added that if the prices of crude oil in the international market failed to rebound, Nigeria would face an unprecedented level of economic crisis, with horrible attendant hardships for the citizenry.

“Our public finance is haemorrhaging to the point that estimated over N30tn is missing or stolen or unaccounted for or simply mismanaged,” Soludo said.

The ex-CBN chief in a piece entitled, ‘Ngozi Okonjo-Iweala and the missing trillions,’ explained how N30tn was allegedly stolen under Okonjo-Iweala’s watch.

He said, “My estimate, madam, is that probably more than N30tn has either been stolen or lost or unaccounted for or simply mismanaged under your watchful eyes in the past four years. Since you claimed to be in charge, Nigerians are right to ask you to account. Think about what this amount could mean for the 112 million poor Nigerians or for our schools, hospitals, roads, etc.

“Soon, you will start asking the citizens to pay this or that tax, while some faceless ‘thieves’ are pocketing over $40m per day from oil alone.”

A Federal High Court in Lagos had last week ordered Okonjo-Iweala to account for the N30tn which Soludo claimed went missing under her watch.

Okonjo-Iweala has repeatedly denied the allegations, claiming they are politically motivated.

The EFCC is investigating the current Chief of Logistics, Defence Headquarters, Maj.-Gen. Emmanuel Atewe, for his alleged role in an N8.5bn scam involving the Nigerian Maritime Administration and Safety Agency.

Atewe was, until last year, the Commander of the Joint Task Force, Operation Pulo Shield, in Yenagoa, Bayelsa State.

The EFCC is also set to re-arraign a former Director-General of the NIMASA, Patrick Akpobolokemi; Kime Engozu and Josephine Otuga, alleged to be Atewe’s co-conspirators.

Akpobolokemi is currently standing a separate trial before a Federal High Court in Lagos for an alleged fraud of N2.6bn.

The EFCC is currently investigating and prosecuting some bank chiefs for allegedly helping a former Minister of Petroleum Resources, Mrs. Diezani Alison-Madueke, to launder $115m (N17.3bn) and another $153m (N23bn) during the build-up to the presidential election.

Some of the beneficiaries of the funds have been indentified, including politicians and officials of the Independent National Electoral Commission.

The Independent Corrupt Practices and Other Related Offences Commission has begun a probe into the activities of directors and senior officials of the Subsidy Reinvestment and Empowerment Programme.

The money, it was learnt, was meant to pay the allowances of 17,500 participants for eight months, which never got to them.

SURE-P was set up by the government of former President Goodluck Jonathan in February 2012 after nationwide protests followed the hike in the prices of petroleum products.

Former President Olusegun Obasanjo was alleged to have spent N56bn on the 8th All Africa Games held in 2003, according to a petition written against him to the EFCC by an anti-corruption group, Coalition Against Corrupt Leaders.

In the petition, CACOL alleged that, “When the 8th All Africa Games was held in Abuja in 2003, it was discovered that most of the disbursements made did not deliberately follow the established due process. COJA did not have a ready book of accounts that could be reviewed. Throughout the games, COJA had no way of tracking its costs and encumbrances.

The Obasanjo-led administration was alleged to have wasted the sum of $16bn (N2tn) on revamping the power sector. The Ndudi Elumelu-led House of Representatives’ Committee on Power, which investigated the government’s spending on the sector, noted that the amount spent did not yield “commensurate result.” The committee recommended that Obasanjo should be called to account for the money.

One of Obasanjo’s close allies before they eventually fell out and ex-Minister of Works and Housing, Chief Tony Anenih, was indicted by the National Assembly for the sum of N300bn missing from his ministry. The missing money was widely believed to have been used to pay off 2003 election “expenses.”

In October 2009, a Senate committee issued a report on its investigation into the use of more than N300bn in the transport sector during Obasanjo’s administration. The committee recommended the prosecution of 13 former ministers, including Anenih, saying he allegedly awarded contracts without budgetary provision.

N56bn – Corruption in the NPA

There is also the Nigeria Ports Authority board scandal, which the EFCC investigated and unearthed a N56bn fraud by the former members of the board of directors. Obasanjo was accused of failing to institute any process towards recovering the alleged stolen money.

There was an alleged mismanagement of $250m (N33bn) initial payment in the rail system contract worth $8.3bn, which was awarded to a Chinese company, China Civil Engineering Construction Company, but has yet to take off. The project, which was expected to kick off in 2006 under a 25-year programme, was awarded by the government, while it had already paid for the first phase of the standard gauge line spanning over 1,315km from Lagos to Kano.

The Buhari-led administration has embarked on a mission to recover loot and assets kept in foreign lands. The government has also begun mass investigation of financial crimes and prosecution of suspects.

Indications had also emerged that the Central Bank of Nigeria was awaiting directive from the AGF before publishing the names of those that have looted the treasury.

A top official of the bank had hinted that the publication of the names of treasury looters was one matter the apex bank was approaching with caution owing to the litigation process involved.

The source said since the issue involved had litigation implications, there was no way the apex bank would publish the list of treasury looters without first securing a clearance from the Office of the Attorney General of the Federation.

When asked if the CBN had formally written to the AGF for clearance, the official said “that is being handled at the highest level.”

But Buhari, in an interview he granted some journalists before he departed London where he attended an Anti-Corruption Summit organised by the British Prime Minister, David Cameron, recently, promised to disclose to Nigerians the amount his government has so far recovered from those who looted the nation’s treasury on May 29 (today).

He said, “So far, what has come out; what has been recovered in whatever currency from each ministry, department and individual; I intend, on the 29th, to speak on this. This is because of all Nigerians are getting from the mass media; because of the number of people arrested either by the EFCC or DSS. But we want to make a comprehensive report on the 29th.”

The Attorney-General of the Federation and Minister of Justice, Mr. Abubakar Malami, had said the government of the United Kingdom had shown its commitment towards repatriating funds stolen from Nigeria.

Malami said the UK expressed commitment towards repatriating Nigeria’s looted funds during a bilateral meeting between the two nations.

He said though there was no estimate of how much of the Nigeria’s funds stashed in the UK, but “it has been compiled for certainty.”