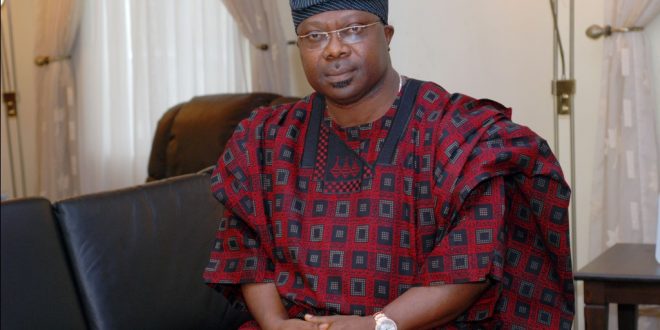 May 25, 2016 Comments Off on EFCC Declares Omisore Wanted Over N700m Dasuki Contract 19 Views But Omisore has described the EFCC’s declaration as mischievous, adding that he was with the EFCC operatives in court on Tuesday and wondered why they did not arrest him in court.

The EFCC said on its official Facebook page that Omisore had been evading arrest for several months and it had no choice but to declare him wanted.

The anti-graft agency said instead of responding to an invitation, the former governorship candidate of the Peoples Democratic Party in the 2014 Osun State governorship election, decided to approach a court for the enforcement of his fundamental human rights.

The commission, however, said it was able to obtain an arrest warrant against Omisore on Tuesday.

The statement read in part, “The EFCC on May 24, 2016, declared a former deputy governor of Osun State, Senator Iyiola Omisore, wanted. The former senator is wanted in connection with a case of receiving and misappropriating the sum of over N700, 000,000 from the Office of the National Security Adviser, between June and November, 2014.

“Omisore has been elusive and refused to report to the commission after an invitation was extended to him on April 7, 2016 requesting him “to come and make clarification on the ongoing investigation.

“Instead of responding to the commission’s investigation, Omisore had approached the Federal Capital Territory High Court for the enforcement of his fundamental human rights. Justice Husseini Baba Yusuf consequently ordered that Omisore should only be arrested through a due and legal process. The EFCC thereafter obtained a warrant to effect the arrest of the politician.”

However, Omisore accused the EFCC of character assassination and blackmail for declaring him wanted.

Omisore, who said this in a statement signed by the Director of Publicity of the PDP in Osun State, Mr. Diran Odeyemi, said he (Omisore) was in court on Tuesday and wondered why the EFCC declared him wanted.

The ex-deputy governor explained that it was a company, Fimex Gill, that was directly involved in the Dasuki deal and the Managing Director of the company had stated that Omisore had nothing to do with the contract.

The statement partly read, “The EFCC is on a character assassination, mischievous and political persecution mission. They were in court today (Tuesday) to ask for an extension of time in the preliminary objection suit filed against Omisore.

“The MD of Fimex Gill indemnified Omisore from their contract deal with the ONSA. The company had even sued them for the payment of their balance. There was no issue of N700m anywhere. The relationship between the company and ONSA is civil and contractual.

“The EFCC should not play the role of political victimisation and coercion. Omisore cannot be stampeded or be oppressed by any government in Nigeria. Blackmail won’t help the EFCC, rather they should come to court with facts. This act of the EFCC is unpatriotic and won’t get them any result.

“How can the EFCC declare Omisore that was in court with the EFCC officials at 9am wanted the same day? The world and human rights community are hereby called upon to caution the EFCC from tarnishing Omisore’s image.”