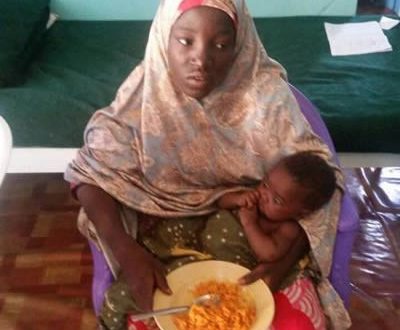 May 19, 2016 Comments Off on Six Of My Colleagues Dead, Says Rescued Chibok Girl 18 Views 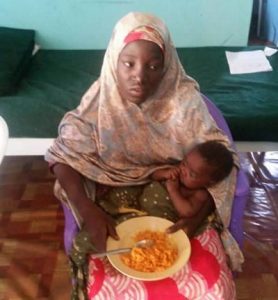 One of the missing schoolgirls abducted by the fighters of the Boko Haram Islamic sect from Government Secondary School, Chibok, Borno State, on April 14, 2014,  Amina Ali Nkeki, has been found, the Nigerian Army has said.

Activists also told the BBC that Amina was found by a vigilante group on Tuesday in Sambisa Forest, close to the border with Cameroon.

Amina was reportedly recognised by a civilian fighter. She told her rescuers that six of her abducted colleagues had died while others were being held in Sambisa Forest by their abductors.

The fighter belonged to the Civilian Joint Task Force, a vigilante group set up to help fight Boko Haram.

Aboku Gaji, leader of the vigilante group in Chibok, said, “The moment this girl was discovered by our vigilantes, she was brought to my house. I instantly recognised her, and insisted we should take her to her parents.

“When we arrived at the house… I asked the mother to come and identify someone. The moment she saw her, she shouted her name: ‘Amina, Amina!’ She gave her the biggest hug ever, as if they were going to roll on the ground, we had to stabilise them.

“The mother called the attention of other relations to come out and see what is happening. The girl started comforting the mother, saying: ‘Please Mum, take it easy, relax. I never thought I would ever see you again, wipe your tears. God has made it possible for us to see each other again.’

“Afterwards, we had to make them understand that the girl would not be left in their care. She must be handed over to the authority.”

Hosea Abana Tsambido, the Chibok community in the capital, Abuja, told the BBC that Amina had been found after venturing into the forest to search for firewood.

“She was saying… all the Chibok girls are still there in the Sambisa except six of them that have already died.”

The Nigerian military said she was from the town of Mbalala, south of Chibok, from where 25 of the kidnapped girls came.

Amina was later moved to Maiduguri, the capital of Nigeria’s Borno State.

Before their arrival in Maiduguri, the Borno State Governor, Kashim Shettima, who was apparently delighted about the news, told the visiting United Nations Under- Secretary on Humanitarian Affairs, Mr. Stephen O’ Brien,  that the freed girl might give information that could lead to the rescue of other abducted girls and perhaps to the hideouts of the insurgents.

The General Officer Commanding (GOC), 7 Division Nigerian Army, Brig. Gen. Victor Ezugwu, who brought the girl to Shettima, told the media that the governor had promised to present the freed girl to President Muhammadu Buhari.

The governor said as a sign of honour, he would take the girl to Mr. President on Thursday (today).

The girl was not allowed to have a chat with the media as she was led to meet with the governor by military personnel.

Shortly after presenting the girl to the governor, Ezugwu told journalists that Shettima would hand her over to President Muhammadu who would in turn present her to the nation.

“I want to further confirm to you that, we have found one of the Chibok girls but we plead for your understanding on this issue, we need to give her time to rest as you can see she is traumatised and nursing a baby.

“The governor has told us that he did not want to take credit for this and will hand over the girl to Mr. President who will in turn unveil her to the nation,” Ezugwu said.

As of  the time of going to the press last night, the governor and the freed girl had not emerged to address the media.

The Acting Director, Army Public Relations, Col. Sani Usman, who had earlier confirmed Amina’s rescue in a statement on Wednesday, added that a  suspected Boko Haram suspect, Mohammed Hayatu, who claimed to be the ‘husband’ of the girl had been arrested by the troops.

Usman, who had earlier given the name of the rescued girl as Fatmata Mbalala, said her name was Amina Ali.

He said that the troops of the 25 Task Force Brigade rescued the girl and arrested the terror suspect who claimed to be her ‘husband’ during what he described as a booking operation at Baale, near Damboa, Borno State.

He said that investigation conducted by the Army showed that the girl was one of the 219 girls abducted from GSS, Chibok

Usman said that the girl was rescued with her one-year old child, named Safiya.

He added that the girl, her ‘husband’ and the child had been taken to Maiduguri for medical screening.

“Please recall that we informed you that one of   the abducted Chibok schoolgirls has been rescued earlier today and promised to give further details.

“Further to that, in continuation of Operation Crackdown,  troops of 25 Brigade Damboa in conjunction with the Civilian JTF deployed in one of the blocking positions at Baale, near Damboa rescued one Miss Amina Ali  and a suspected Boko Haram terrorist, Mohammed Hayatu, who claimed to be her husband.

“Both were brought to the Headquarters of 25 Task Force Brigade Damboa at about 2.30pm today (Wednesday).

“Preliminary investigation shows that she is indeed one of the abducted Chibok schoolgirls abducted by Boko Haram terrorists on  April 14, 2014 in Chibok and her name is Amina Ali as against Falmata Mbalala that was earlier stated.

Meanwhile, the BringBackOurGirls movement on Wednesday in Abuja confirmed that the found girl is one of the over 276 schoolgirls kidnapped in Chibok.

A statement by the spokesperson for the  #BringBackOurGirls#, Sesugh Akume, gave her name as Amina Ali Darsha Nkeki from Mbalala.

Akume said the girl had provided useful information that her other classmates were still being held by terrorists in Sambisa Forest.

Reacting, a civil rights organisation, ActionAid Nigeria, on Wednesday said the discovery of Amina was an indication that the 218 others would also be found.

Share
Previous Military Hands Over Rescued Chibok Girl To Borno Gov
Next From Flint to Lagos, Time For Democratic Control of Water