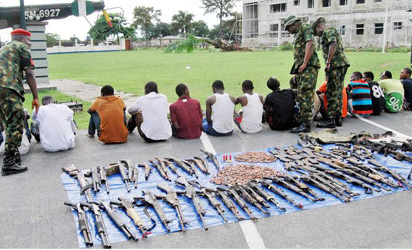 Operatives of the 2 Brigade of the Nigerian Army, Port Harcourt, have arrested 17 suspected cultists and armed robbers.

The Army also recovered arms and ammunition, including dynamites, from the hoodlums from the various locations in the state.

Briefing newsmen before parading the suspects in Port Harcourt on Tuesday, the Assistant Director, Army Public Relations, 2 Brigade, Captain Eli Lazarus, said arrests were made during their operations in Ahoada East, Ogbogoro in Obio/Akpor, Omoku in Ogba/Egbema/Ndoni, Omuonwa and Isiokpo in Ikwerre LGA.

He said, “The 2 Brigade of the Nigerian Army has stepped up its operations to stem the tide of criminal activities in its areas of responsibility. To this end, several raid operations were conducted on suspected criminal/cultists hideouts.”

Lazarus stated that the suspects would soon be handed over to the appropriate agency for further investigation.

He assured residents that the Brigade would continue to work assiduously and make sacrifices to clear criminals in its area of responsibility.