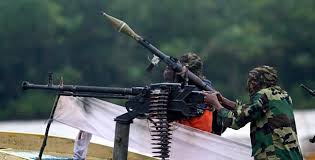 May 5, 2016 Comments Off on Militants Kill Four Naval Ratings, Two Others In Bayelsa 12 Views 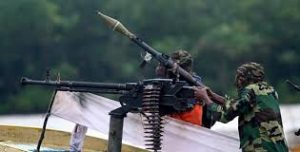 The incident was said to have occurred on Tuesday at the Nembe creeks in Nembe Local Government Area of the state.

It was learnt that a senior employee of the oil servicing firm and his wife, identified simply as Mercy, were among persons reportedly gunned down by the gunmen.

While Mercy was said to have been killed on the spot, sources said the whereabouts of the ratings and the oil worker were unknown after the incident.

A security source, who spoken on condition of anonymity, described the attack as deadly, saying the gunmen took their victims by surprise.

He said the attack occurred at one of the wellheads that supply crude oil to the Nembe Flow Station which formerly belonged to the Shell Petroleum Development Company.

The source said the victims left the flow station, which was reportedly sold to an oil company, ICEO, by SPDC, to inspect the wellhead.

He said the wife of the oil worker, who came on a visit, decided to accompany her husband on the inspection tour.

“Immediately they got to the wellhead close to the flow station, some militants waylaid them, killed the woman on the spot. The whereabouts of the employee and the naval ratings are still unknown. There are indications that they have been killed by the gunmen,” the source said.

The source, a senior security officer, lamented the ongoing attacks on security personnel and military gunboats in the region.

When contacted, the spokesman for the Central Naval Command, Lt. Commander Edward Yeibo, said though there was an attack but he did not know whether the ratings were killed or not.

On Monday, gunmen suspected to be sea pirates attacked troops of Joint Force in the Niger Delta, Operation Pulo Shield, while patrolling the waterways at Peregbene along the Ogbia-Nembe waterways in the state.

The gunmen were said to have engaged the troops in a one-hour shootout but unfortunately for them, four of the pirates were hit by bullets from the troops’ gunboat.

However, two soldiers were injured in the gun duel.