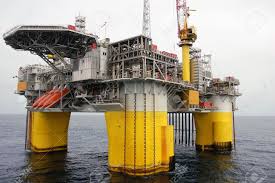 wenty years after it was discovered, the Aje field located in Oil Mining Lease 113 has achieved its first oil, putting Lagos on the list of oil-producing states in the country.

The milestone is coming after several missed targets for the achievement of first oil, the latest being March this year.

Panoro had in an update posted on its website on April 20 said the final hook-up procedures were in progress with a view to bringing the wells into production shortly.

The YFP said after over 25 years of exploratory, appraisal and developmental activities, it had successfully pioneered the opening of the Frontier Benin Embayment, describing the Aje field as the first to record production from this part of Nigeria and the first production outside of the Niger Delta.

It said the inauguration of the Front Puffin Floating Production, Storage and Offloading vessel was successfully completed after its arrival in Nigeria on March 16, 2016.

Oil produced from the Aje field will be stored on the Front Puffin, which has production capacity of 40,000 barrels of oil per day and storage capacity of 750,000 barrels, according to the YFP.

The Chairman, YFP, Mr. Tunde Folawiyo, was quoted in a statement to have said, “The attainment of this milestone is indeed a laudable achievement not just for the YFP, but for the Nigerian oil and gas industry as a whole and indeed Lagos State, which can now be addressed as an oil-producing state.”

He said recording the achievement in the present global oil climate, together with the peculiar challenges of the field, was clearly a no mean feat.

“We are very proud of and appreciate the efforts, determination and commitment of the entire Aje project team, past and present; the constant support from our regulators, the DPR and Ministry of Petroleum; and our financiers. We believe this crucial support will spur us on to even greater achievements,” Folawiyo added.

The joint venture partners had in October 2014 taken the final investment decision to develop the first phase of the field.

They submitted the Field Development Plan to the Department of Petroleum Resources in January 2014 and it was approved in March, with first oil expected late in 2015.

Yinka Folawiyo Petroleum was granted the Oil Prospecting License 309 in June 1991 as a sole risk contract under the Federal Government’s Indigenous Allocation Programme, which was put in place to encourage the development of a locally-owned and operated Nigerian upstream oil industry.

After the successful drilling and testing of both wells, OPL 309 was converted to OML 113 in 1998, with an initial term of 20 years, it said on its website.