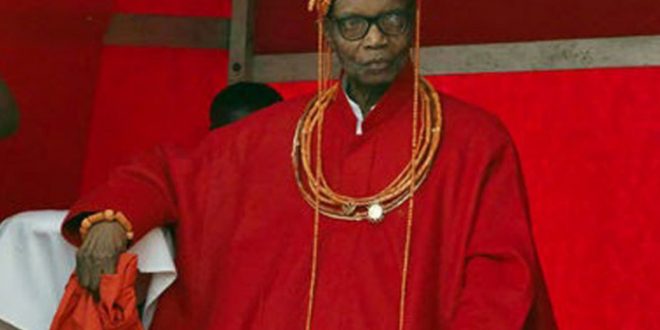 April 30, 2016 Comments Off on Oba Of Benin Finally Joins His Ancestors 88 Views 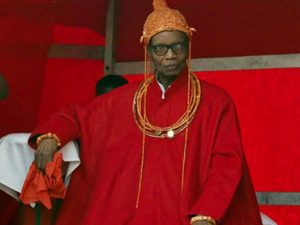 The Iyase of Benin, Chief Sam Igbe, yesterday, announced the passing on of the great monarch at the palace ground in Benin City, saying, “Osorhue Burun” in Edo, meaning “the chalk has broken.”

He added: “Oba Erediuwa of Benin Kingdom, the Prince of Peace, Ebo, Ayamwirhe, Emini Mini Mini, has reunited with his ancestors. May he find perfect peace with God.”

Both President Muhammadu Buhari and former President Goodluck Jonathan, among other distinguished personalities, have expressed grief at the passing of the monarch.

The announcement of Erediauwa’s passage was followed by the traditional breaking of white chalk at the entrance to palace and a formal announcement of the closure of all markets within Benin as a mark of respect for the revered Oba.

The announcement that the Oba had joined his ancestors was done in the presence of palace Chiefs, Enigies, Children of the Oba without the Crown Prince, relatives and subjects.

As a mark of respect for the late Oba, markets in the whole of Edo land will remain closed till further notice while traditional chiefs with several beads will wear only one.

In his reaction, President Muhammadu Buhari, yesterday, said he received with sadness and an immense feeling of great national loss, news of the passing away of the highly revered traditional ruler of Benin Kingdom.

A statement by the Special Adviser to the President on Media and Publicity, Mr. Femi Adesina said Buhari extended special commiseration to Crown Prince, Eheneden Erediauwa and to other members of the late Oba’s immediate family.

The statement reads: “On behalf of the Federal Government, Buhari extends sincere condolences to Governor Adams Oshiomhole, the people of Benin Kingdom and Edo State on the passage of the beloved monarch who had ruled over his people since his ascension to the throne in 1979.”

Buhari assured the people of Edo State of the fullest sympathy and solidarity of the federal government and all Nigerians as they mourned Oba Erediauwa whom he said would always be remembered as one of the most outstanding traditional rulers of his era.

The president prayed that God Almighty would receive the late Oba’s soul and grant him peaceful repose.

He also prayed that God would grant Crown Prince Erediauwa the wisdom and courage he would require to build on the laudable legacies of Oba Erediauwa.

Also reacting, former President Goodluck Jonathan expressed grief at the passage of Oba Erediauwa, describing the late monarch as a stabilising force and bridge-builder, who was committed to the cause for Nigeria’s unity, growth and renaissance.

Jonathan, in a condolence message to the people and

Government of Edo State, also maintained that the late Oba Erediauwa served as a cultural icon and spiritual guide of the rich Benin cultural heritage.

Jonathan said: “I learnt with profound grief, the news of the passage to eternal glory of the Omo n’Oba n’Edo Uku Akpolokpolo, Oba Erediauwa, the Oba of Benin, after a glorious 36 years on the throne.

“The late Oba Erediauwa was an exemplary monarch who was highly revered and respected across the country because of his love for peace and knack for conflict resolution. He was indeed a peace-loving father figure, a stabilising force and courageous bridge builder who devoted so much energy to not only bringing communities closer, but also ensuring rancor-free politicking by uniting politicians of divergent principles and proclivities.

“I can recollect easily from my personal interactions with the late Oba Erediauwa that he was a modest, urbane, and rational monarch. He will indeed be missed by his family, the good people of the great Benin Kingdom, Edo State, and the entire nation.”

The Speaker of the House of Representatives,  Yakubu Dogara also commiserated with the people of Bini Kingdom over the death of the Oba of Benin, Omo n’Oba n’Edo Uku Akpolokpolo Oba Erediauwa.

In a condolence message, former Vice President Atiku Abubakar said the late Oba Erediauwa was a role model, an exceptional leader not only of his Benin people but also a leading light in the committee of traditional rulers in the country.

The former vice president noted that the late Benin monarch radiated royalty, majesty, wisdom, intelligence and nationalism even as he spared no effort in protecting the traditions and values of his people.

Atiku noted that his passing came at a critical time when the country had numerous challenges of nation-building and would miss his wise counsel.

“The Oba’s carriage comes with an élan that was peculiar with the reverence of royalty. His uncommon courage was symbolic of the can-do spirit of the Edo mind. His unity of purpose was not in doubt even as he used his revered position to promote constructive engagement amongst all shades of opinion and culture in Edo state. As a thorough-bred bureaucrat, rising to the pinnacle of his career as a Federal Permanent Secretary, he understood the dynamics and intricacies of governance.

Before he was crowned in March 1979, he was known as Prince Solomon, Aiseokhuoba, Igbinoghodua Akenzua. He attended Edo College, Benin City, Government College, Ibadan, then Yaba College, before going to King’s College, Cambridge to study Law and Administration. He joined the Eastern Nigeria Civil Service in 1957 as a District Officer, and later moved to the Federal Civil Service where he retired as Permanent Secretary, Ministry of Health in 1973.

For a short period, he was the regional representative of Gulf Oil. In 1975 he was appointed Commissioner for Finance in Bendel State, during the Military Administration of Major-General George Agbazika Innih before he ascended the throne of his forefathers.

Oba Erediauwa took on the title and duties as traditional head of state and rightful heir of the extinct Benin Empire when he was crowned, succeeding his father, Oba Akenzua II.