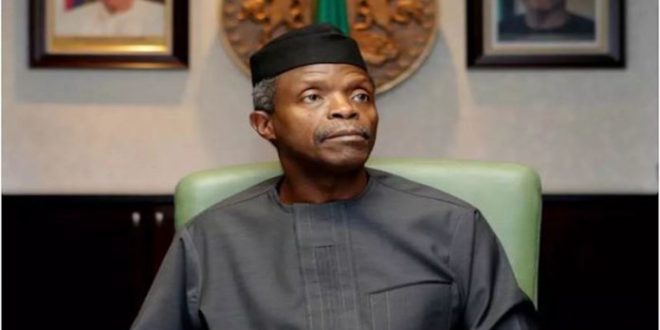 Osinbajo: 250,000 Barrels of Oil per Day Being Lost in Niger Delta 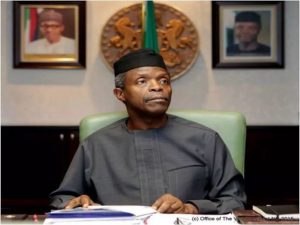 Vice President Yemi Osinbajo said at the weekend that pipeline vandalism in the Niger Delta was causing Nigeria huge revenue losses and preventing the country from meeting its daily crude oil production plan. Osinbajo made the assertion on Friday in Warri after an assessment of the damage to pipelines at the Forcados Terminal in Delta State. He said the federal government was weighing several options in an attempt to tackle the menace, including dedication of a special anti-vandalism security force to the oil producing areas.
The Navy has already commenced a massive operation in the Niger Delta to secure oil facilities.

In a related development, THISDAY has learnt how International Oil Companies operating in the country acquiesced to a request by the Minister of State for Petroleum Resources, Dr. Ibe Kachikwu, to support petrol marketers with more foreign exchange to import premium motor spirit. PMS, the most consumed petroleum product in Nigeria, is mainly imported. Shortfalls in the product’s supply in the last three months owing to foreign exchange shortages have engendered a scarcity that is threatening both economic activities and living standards.

But in recent meetings with the IOCs, Kachikwu was said to have appealed to them to show greater commitment to the country, particularly, by helping the federal government’s effort to resolve the protracted petrol scarcity.

Nigeria recently lost its Africa’s top oil producer status to Angola following vast drops in crude oil production. According to the latest data from the Organisation of Petroleum Exporting Countries, Nigeria’s daily crude oil production fell by 67,000 barrels per day last month. In its Monthly Oil Market Report for April, which was released on Wednesday, OPEC said Nigeria produced 1.677 million barrels per day in March, down from 1.744 million bpd in February, while the Angolan oil output rose from 1.767 million bpd to 1.782 million. It was the second time in four months that Nigeria would be pushed to the second position by Angola in the continental crude oil production profile.

Lamenting the damage to Nigeria’s production capacity due to the destruction of oil and gas facilities in the Niger Delta by pipeline vandals, Osinbajo said the federal government was considering deploying more sophisticated military machinery in the region to protect the oil infrastructure.

Fielding questions from newsmen, he said the country was “losing thousands of barrels of production. We are not able to produce as much as we ought to. About 250,000 barrels are lost per day. We are losing large sums of money daily. We look for alternatives while we look forward to repairing the pipelines.”

“The damage done has led to low supply of gas and most of the power plants are not functioning to maximum capacity. We went to Forcados to see for ourselves the sabotage done to our pipelines. We have seen the alternative steps that the NNPC is taking in order to ameliorate the damage that has been done and the problem associated with getting gas from that terminal to all of our plants.”

The vice president, who was accompanied on the visit by the Delta State governor, Dr Ifeanyi Okowa, and some senior federal and state government officials, added, “There is a lot of effort being made by the federal government and (Delta) state government as well as communal help. We must meet current vandalism challenges but also look into what we can do in the future.
“We would have to deploy even sophisticated weapons to ensure we contain the vandalism, overhaul security, and a permanent pipeline security force might also be an option to look at.”

He likened pipeline vandals to “any type of terrorists or saboteurs,” saying President Muhammadu Buhari’s position on confronting vandals with the severest measures possible should be supported by all and sundry. “I agree entirely that pipelines vandals should not be tolerated under any circumstances,” he said.

Meanwhile, a top official of the Nigerian National Petroleum Corporation, who did want to be mentioned because he was not authorised to speak on the matter, told THISDAY yesterday that the foreign oil companies had agreed to aid the petrol marketers with foreign exchange. He said the arrangement was not a profit hunt by the IOCs, but basically a mission to help Nigeria resolve its crippling fuel problem.

The official said Kachikwu had to bring his relationship in the industry to bear on the deal, having worked in the upstream sector with ExxonMobil.
He said under the deal, the IOCs would sell their dollars at current Central Bank of Nigeria exchange rate to the marketers, stressing, “It was a huge sacrifice they were willing to make for Nigeria.”

Kachikwu had recently announced a $200 million forex package negotiated with the IOCs and the CBN to ease the forex challenges of petrol marketers. The package, he explained, would see individual IOCs tied to select fuel marketing companies to help them with forex to meet their Quarter-2 importation lot.

The source explained, “That’s the sector that he used to work in and so what he did first was to leverage on the relationship he had built over the years to salvage the current circumstance when we don’t have enough to go round everybody.

“The truth is that it is a lot of sacrifice for them because these companies are also under a lot of pressure and they are going through challenging times with oil prices, but they could turn around to do this for Nigeria.

“We needed to think out of the box and so he went to them, sat with them and talked with them individually to try and get commitment because, no doubt, everybody would want to hold on to their dollars. But he got them to agree to support this in the interest of the country.

“It is better for everybody to get involved in this and that was the driver for the initiative. He has matched each of the IOCs to every local player so every one of them is linked to the players they will support at this period.”

Asked about possible objections by the boards of the IOCs to the request, the NNPC official said, “It is down to the same will and more than maximising shareholders returns. Unless you are not a player who has come to stay here, then you will step aside and say you really don’t care.

“‘It is goodwill and emotive connection that made them support the initiative and this was more than the usual boardroom bureaucracy and thinking.”
He also said the minister did not agree to any form of concession with the IOCs on the forex deal, adding, “There was no concession; you could almost look at it from a CSR stand.

“They do business here and they get value and they have invested good money here too. But in times like this it is fair for them to show a long-term commitment to this country. That is what they have done.”

The source also disclosed that as part of the compromise, the IOCs would exchange their dollars at extant CBN rates to the marketers while the CBN will in turn exchange the naira for dollar whenever they need it for procurements and other forex denominated expenses.

He said other upstream operators in the country that were initially left out of the arrangement had begun to turn up and ask to be included.
In the meantime, the NNPC has been urged to urgently lift the suspension it placed last month on product allocation to credit marketers to ease the current scarcity in the country.The marketers alleged that NNPPC’s ban on petrol allocation to credit marketers in March coincided with aggravation of the now three-month-old acute shortage of petrol.

One of the marketers, who is a member of the Association of Credit Marketers of Petroleum Products in Nigeria (ACMPPN), told reporters that credit marketers had not been allocated products by the NNPC since last month. The marketer who spoke anonymously explained that the decision of the NNPC to deny them products had contributed to the shutting down of about 1,000 filling stations across the country

He noted that the credit marketing framework worked well during the time of former Presidents Olusegun Obasanjo and Goodluck Jonathan, adding, “NNPC knows that without our participation it will be very difficult to end the scarcity and so the big question is, why are they still not allowing us to do our business. In all the depots across the country no marketer is loading product.”

When contacted to clarify the development, the national president of ACMPPN, Mr. Samuel Nwoga, said the group was already in talks with the NNPC and the situation was being looked into. He, however, insisted that the credit marketers were not indebted to the NNPC.