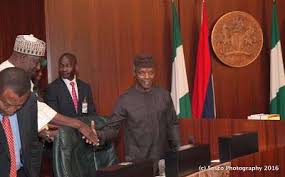 FG Is Doing Everything Possible To Address Current Hardship – Osinbajo

April 10, 2016 Comments Off on FG Is Doing Everything Possible To Address Current Hardship – Osinbajo 5 Views

Vice President Yemi Osinbanjo has again called on Nigerians to exercise patience as the Federal Government is doing everything possible to address the current economic situation in the country.Osinbajo made the call on Saturday when he visited the Emir of Kano, Malam Muhammad Sanusi II in his palace.

Osinbanjo stressed that the Buhari-led administration was committed to transforming the living standard of Nigerians.

According to him, the Federal Government is doing everything possible to overcome the challenge soon.
He told the emir that he was in the state to sympathise with the state government, Emirate Council and the entire people of the state on the recent fire outbreak at the Abubakar Rimi Market.

“We also came to inspect some of the developmental projects executed by the leadership of Gov. Abdullahi Ganduje,’’ Osinbajo said.
Responding, the emir attributed the current hardship to the way and manner previous administration handled the affairs of the nation.

He, however, called on the government to find lasting solution to the hardship.The emir also advised government to step up effort in enlightening Nigerians on the nation’s economic situation.

He promised that the emirate council would do same and pleaded with Nigerians to bear with the situation, assuring that the hardship would soon be overcome.