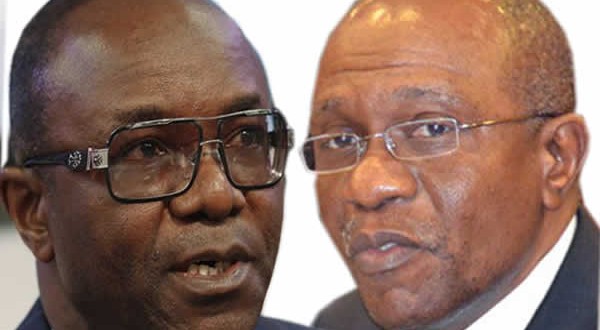 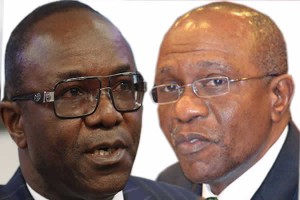 The development brings to question the new administration’s criticism of financial recklessness of the previous administration and its resolve to cut costs in the face of falling oil prices.

The Bombardier luxury private jets with cozy interior, flown by Kachikwu and Emefiele belong to VistaJet Holding SA, a Swiss charter airline that has satellite facilities in some countries of the world, including Nigeria.

Diezani had faced sharp criticism for chartering VistaJet’s private jets for several months and accumulating huge sums of bills that was almost half of the cost of a private jet.

The CBN, impeccable sources within the apex bank revealed, had also entered into a long-term and renewable contract with VistaJet.

The contract gives Emefiele unfettered access to one of VistaJet’s luxury planes any time of the day and for whatever number of hours.

According to top officials of the Nigerian Airspace Management Agency working in the Air Traffic Control Towers in Lagos and Abuja airports, Emefiele has been flying regularly one of VistaJet’s private jets.

He has been sighted flying the Bombardier Challenger 850 flown by Diezani during the last administration.

According to unconfirmed sources, the CBN pays $1m to VistaJet a year for the use of any of its jets by the governor any time.

A top official of the CBN, who spoke on condition of anonymity, confirmed to one of our correspondents that the apex bank and VistaJet had signed an agreement that allowed the governor to make use of any of the private jets on demand.

The central bank official, however, said the amount was not up to $1m a year, saying he neither had the details nor the terms of the contract.

The CBN source said, “The CBN entered the agreement because of flight delays and cancellations associated with domestic airlines. Because of the nature of the work of the CBN governor, he may be wanted at the Presidency or any other key place at any time. The only way he can meet up is to enter into this kind of arrangement. The frequent disappointments associated with local airlines may not allow this to happen. This is why we bought block hours from the firm.”

Asked why such an agreement was not signed with any of the local charter airlines, the official said, “This company, though a foreign one, has met all the requirements of the CBN. The apex bank also discovered that they will perform. I am sure if other local players met the requirements, they could have been considered.”

Although VistaJet planes fly customers to any part of the world, the CBN official said the agreement with the apex bank was limited to only domestic flights.

“The demand of the job at the CBN requires such an agreement. You can recall that during the military era, the CBN used to have a private jet of its own. But this time, we are not buying, it is just to buy block hours and this is limited to domestic flights,” the CBN official added.

The Acting Director, Corporate Communications, CBN, Mr. Isaac Okoroafor, had yet to respond to calls and text messages, seeking clarifications on the matter as of the time of filing this report.

The VistaJets’ representative in Nigeria could not be reached for comments. Calls and text messages sent to the official telephone lines did not go through.

Meanwhile, findings from NAMA Air Traffic Control Towers showed that one of the VistaJet private jets was flown by Emefiele and Kachikwu to the former’s mother burial in Delta State last week.

VistaJet, which parades brand new Bombardier jets in its fleets, enjoys perhaps the highest patronage among the operators in the Nigerian charter airline business market.

The Swiss charter airline, which has over 50 luxury planes in its fleet, deployed five of them in Nigeria during peak seasons.

Findings showed that politicians and public office holders, who had ceased to fly private jets shortly after the inauguration of President Muhammadu Buhari, had started patronising charter airlines again.

The development puts under spotlight Buhari’s decision not to cut down the 11 aircraft currently in the Presidential Air Fleet.

The PAF is currently the second largest commercial airline in the country after Arik Air.

Apart from Arik, none of the other carriers including Dana Air, Medview Airlines, FirstNation, Azman Airlines, Air Peace, Overland Airways has over 11 aircraft in its fleet.

According to findings, the PAF include two Falcon 7X jets, two Falcon 900 jets, a Gulfstream 550, one Boeing 737 BBJ (Nigerian Air Force 001 or Eagle One), and a Gulfstream IVSP.

Others are one Gulfstream V, Cessna Citation 2 aircraft and Hawker Siddley 125-800 jet.

This brings a combined estimated value of the PAF to $390.5m (N60.53bn). According to aviation experts, about 15 per cent of this amount is expected to be spent annually in maintaining these planes.

Nigeria happens to be one of the few countries in the world with a large PAF.

Most major countries in Europe and Asia maintain two aircraft in their PAF, according toWikipedia.

Countries like Ghana, Algeria and a host of others in Europe maintain only one aircraft in their PAF.

When contacted, the Nigerian National Petroleum Corporation stated that it does not pay any kobo for the services rendered by VistaJet.

Its Group General Manager, Group Public Affairs Division, Mr. Garba Deen, told one of our correspondents that neither the ministry nor the national oil firm had spent a dime as payment for the services of  VistaJet since the Minister of State for Petroleum Resources and Group Managing Director of the NNPC, Ibe Kachikwu, came on board.

He stated that the NNPC had about 60 per cent stake in various joint ventures, adding that the partners in the JV agreements were responsible for the payment of the services rendered by the private airline.

Deen also noted that the jet owned by the NNPC had issues and had been parked.

He said, “Since he (Kachikwu) became GMD, he has not spent any money on private jet. The NNPC jet has problems and I believe that it’s been moved to the villa. The VistaJet that we are using is owned by the companies with whom NNPC has joint venture agreements. And you know that the NNPC has about 60 per cent in its JVs.

“So since we have 60 per cent of the JVs, anything that has to do with the JV operations, including jets and so on, we are entitled to use it. Therefore, it does not cost NNPC a single kobo to use VistaJet that you mentioned.”

When asked to further explain the 60 per cent joint ventures which the NNPC has with other oil majors, Deen said, “We have JV agreements with oil majors and international oil companies, and I am going to be specific about only VistaJet. The companies with whom we have JV agreements are the ones paying VistaJet for we are entitled to use that facility because we contribute 60 per cent of the joint venture funding.

“VistaJet is part of the services that the joint venture operations entail. So NNPC does not pay, the Nigerian government does not pay N1 for the use of those VistaJet’s planes. It is part of the entitlement that we get as partners in the JV agreements.”

Deen stated that the entitlement of the NNPC had been available all the while but nobody exploited it until the present minister came on board.

“So in other words, the practice is saving Nigeria a lot of money by way of probably maintaining private jets or buying jets or even chartering planes in order to travel abroad.”

Meanwhile, aviation experts have criticised Kachikwu and Emefiele over the development.

Aviation Consultant and CEO, Finum Aviation Services, Mr. Sheri Kyari, said, “I would not support them because the Presidency has enough aircraft for them to use. For them to go out and start patronising the services of chartered airlines, I don’t think it is right. The President has close to 10 aircraft so I think that the duo of Kachikwu and Emefiele can use what is already on ground rather than going about to charter some other planes since the government said it was pursuing accountability and prudence.”

He noted that they (Kachikwu and Emefiele) would not ordinarily be expected to be flying chartered flights especially as the Federal Government had banned public officials from flying first class.

He said, “In that regard, they should have no reason to use private jets to fly on official duties. They could fly commercial airlines like every other person and if it is for their security or expediency of the job, there are enough aeroplanes for the Presidency. We would not support that because we are talking about reducing the cost of governance.”

Chief Executive Officer, Centurion Aviation Safety and Security Consult, Group Capt John Ojikutu (retd), said Kachikwu and Emefiele were not entitled to use the planes in the presidential fleet.

He said, “The only thing I would tell you like a Nigerian is that one, if you read the newspapers, the President is trying to cut the costs of travelling, for those travelling on first class or business class. I think that should apply to them too. But the presidential fleet is not meant for them; it is meant for the Presidency. The Minister of Petroleum will always travel; I don’t know where the CBN governor is going anyway that he has to be travelling with a private jet. But these are issues that are supposed to be ironed out by the National Assembly. It depends on if they have made a budget for them to be flying private airlines. A former minister of petroleum ran into murky waters on this same issue.

On private jets owned by the Nigerian National Petroleum Corporation and other government departments, Ojikutu said, “Does the NNPC have budget for it? If the corporation has budget for it, there is very little anybody can do about it, especially if it has been approved by the National Assembly. If not and they are spending that money, the National Assembly will call them to order. They are not the only one; there used to be a time when NEPA had a private jet, Immigration also had, the police had too.

“The questions the National Assembly should ask are: Have they appropriated money for them to fly private jets? If they have not appropriated money for it, they should ask them where they are getting the money from. How much does it cost you to run it when there are other alternatives for you? If it cost you so much, have we appropriated that amount of money to you? If we haven’t appropriated that kind of money to you, then how are you making the money? Are you stealing the money from somewhere or you are not revealing how much money you are making? So these are questions for the National Assembly to handle.”