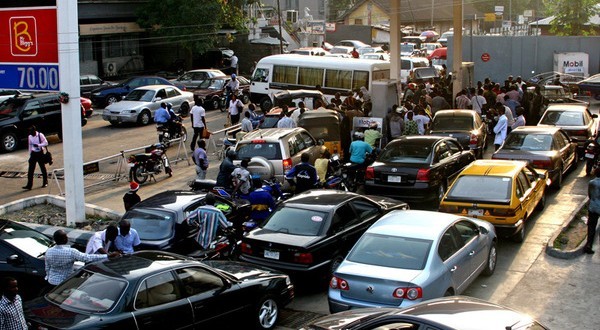 The scarcity of petrol got worse in many parts of the country on Monday despite assurances by the Nigerian National Petroleum Corporation that the situation would improve.

Lagos, which traditionally receives more product than other parts of the country, was virtually grounded on Monday as only few vehicles moved about, with many passengers stranded at bus stops, while queues of desperate motorists stretched for kilometres at the few filling stations that had the product to sell, and partially blocked major roads.

The same situation was recorded in the Federal Capital Territory, Osogbo, Abeokuta, Ibadan, Minna, Maiduguri, Bauchi, Ado Ekiti and Benin City, among others.

At most filling stations belonging to independent marketers, a litre of the product sold for between N120 and N200 instead of the N86 and N86.50 official pump prices, while black market hawkers sold it for as high as N400 per litre.

Many commuters were seen in Lagos struggling to get commercial vehicles to different destinations, even as some transport operators increased the fares by 100 per cent or more.

On the Otedola Estate and Berger end of the Lagos-Ibadan Expressway, the Mobil, Capital Oil and Oando filling stations had longer queues of desperate motorists and other customers, which spilled onto the road and caused a serious gridlock.

The long queues at the filling stations forced many motorists to resort to the black marketers, who were having a field day as they sold the product at exorbitant prices.

Our correspondent gathered that most of the independent marketers’ depots in Apapa did not have petrol on Monday, while few had kerosene and Automotive Gas Oil (diesel).

Out of the 36 depots surveyed, only Capital Oil, Folawiyo and Heyden were said to have petrol, while MRS was still expecting its vessel.

A commuter, Jumoke Awe, said she bought a litre of petrol for N300 on the black market on her way to Palmgrove from Ajah, but had to park her car somewhere along the Lekki-Ajah Expressway so as to take a commercial bus due to the attendant gridlock.

When asked if there was any new development in terms of supply, the National Operation Controller, Independent Petroleum Marketers Association of Nigeria, Mr. Mike Osatuyi, said the supply had not really improved.

Another source, who is an official of an independent marketer, said “There is no new development today (Monday). Some of the vessels that the government promised to bring in have yet to come. They promised to bring two vessels last week, but only one came on Thursday, and it started discharging on Saturday, and is still discharging now.

“One of the vessel’s areas has been cleared now. So, we are expecting that they will bring one overnight if they are going to keep to their promise. There is a gentleman’s agreement now that until this problem abates, no other product vessel should come into the Apapa jetty.”

The National President, Nigeria Union of Petroleum and Natural Gas Workers, Igwe Achese, said members of the union were ready to work with the NNPC to ensure effective distribution of fuel to filling stations.

He, however, said the NNPC needed to meet the conditions the union earlier discussed with its management.

While speaking at the Central Working Committee meeting of the Joe Ajaero’s faction of the Nigeria Labour Congress in Lagos on Monday, Achese highlighted challenges that the Ministry of Petroleum Resources needed to address to include the passage of the Petroleum Industry Bill, building of new refineries and prevention of gas pipeline vandalism.

“While removing subsidy, our refineries must work because we cannot continue to import. With the prices of crude oil in the international market, it is difficult for any nation to sustain the payment of subsidy to any importer of petroleum products,” Achese said.

There were few vehicles plying the roads in the state capital on Monday, while the small number of transport operators on the road charged exorbitant fares.

Many prominent markets like those at Dugbe, Aleshinloye and Gbagi were nearly deserted because traders decided to stay indoors and buyers seemed to have postponed shopping till the situation normalises.

Residents of Bauchi metropolis lamented the unending hardship they are facing as the scarcity of petrol become worse.

One of our correspondents, who went round some filling stations in the state capital, observed that the product was not available.

Most of the filling stations visited were under lock and key, while black marketeers continued making brisk business by selling the product for between N250 and N300 per litre.

In Minna, Niger State, the situation has forced the Department of Petroleum Resources to relax its crackdown on independent marketers who are now selling the product for between N220 and N260 per litre.

The State Controller, DPR, Mr. Abdullahi Jankara, said the agency had decided to allow independent marketers to sell the product at their own prices because of its non-availability in order to reduce the hardship being faced by the people.

The fuel crisis in Borno and Yobe states got worse on Monday as petrol sold for between N250 and N300 on the black market.

There was virtually no place to buy at the right price other than the NNPC mega stations where it could take two or three days to get.

One of our correspondents reported that the fuel situation in Osogbo, the Osun State capital, and other towns in the state had not improved.

It was observed that many filling stations were shut on Monday because of non-availability of the product, while the few ones that had sold a litre of petrol for between N180 and N200.

The NNPC mega station in Osogbo sold at the official price of N86 but the queues at the station were about two kilometres long.

Motorists in queue at the station were disorderly until a team of the Nigerian Security and Civil Defence Corps led by the state Commandant, Mr. Olusola Ayodele, came to restore sanity.

Many civil servants in Ekiti State have abandoned their cars for public transport due to the fuel scarcity.

A litre of petrol sold for N200 at filling stations in Ado Ekiti, while a commercial driver told our correspondent that it sold for N230 in the hinterlands.

In Edo State, the lingering fuel scarcity worsened on Monday, as a litre of petrol sold for N230 at the few filing stations that sold the product to hundreds of desperate motorists.

On the black market, it sold for between N250 and N300 per litre, while some black marketeers insisted on selling to only customers willing to buy five litres and above.

In Ogun State, transport fares on most of the routes had increased by between 50 and 150 per cent.

Commuters paid between N600 and N700 from Sango to Abeokuta, a journey that hitherto attracted between N250 and N300.

However, queues by motorists and other petrol seekers reduced marginally on Monday as more filling stations dispensed fuel in Abuja and parts of Nasarawa State.

The largest mega filling station belonging to the NNPC, located on the Kubwa-Zuba Expressway, had lesser number of motorists when compared to what obtained all through last week.

According to them, more filling stations received the product on Monday, as they expressed the hope that the situation would improve by the day.