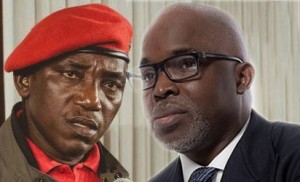 The  President of the Nigeria Football Federation, Amaju Pinnick and the Sports Minister, Barrister Solomon Dalung  will today meet in Abuja on whether the NFF can go ahead and hire a foreign coach for the floundering sen ior national football team, the Super Eagles or keep faith with the local coaches.

Already, the NFF President had since signed off any talks about hiring any local coach for the Eagles, as long as he remains at the helm of Nigeria’s football administration.

In the aftermath  of the Eagles’ failed attempt to secure a ticket to the 2017 Africa Cup of Nations after they fell 2-1 on aggregate to the Pharaohs of Egypt in Kaduna and Alexandria, Pinnick had  declared to reporters, “it’s either a foreign coach, or I resign.”

The Alexandria declaration did not come as a surprise to most followers of the NFF helmsman as he has never hidden his contempt for local coaches. An earlier statement from him had drawn the ire of many local coaches, including the President of the Nigeria Football Coaches Association, Bitrus Bewarang who said the NFF boss was being disrespectful to Nigerian coaches.

“What has a foreign coach achieved that a Nigerian coach has not?” Bewarang asked, insisting that, “Nigerian coaches can hold their own anywhere in the world. In all this, however, the local coaches seem to have an ally in the Minister of Sports, Solomon Dalung, who only recently said he was opposed to the hiring of a foreign coach.

He claimed local coaches were not given enough time to prove their mettle. In a veiled reference to Samson Siasia’s fire-fighting mission with the Eagles against the Pharaohs, Dalung intoned, “you cannot assess a coach just after one or two matches.

You give him ample opportunity and generate correct data to assess his performance. Talking about today’s meeting, the NFF boss had told reporters in Lagos last week that he would take his case to the minister where he will brief him on the need for a foreign coach, “He is still sitting on the fence because he is under intense pressure.”

With this contrasting positions, it is expected that the meeting today will be the climax of all the drama.