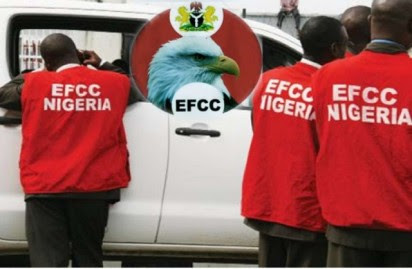 The Economic and Financial Crimes Commission, EFCC, may have started investigating confidants and companies close to some prominent politicians in the last dispensation in its corruption fight.

, the commission has detained two confidants allegedly fronting for the politicians and frozen the accounts of their companies on allegation that they laundered money for them.

According to the official, both men were arrested in connection with ongoing investigations into a $40 pipeline security contract, might have been fronting for the politicians.

He said: “Even though One-Plus claimed that the pipeline job was successfully executed, we want to know how it was awarded and who got paid for what from the $40 million.”

Sources close to the anti-graft agency said  Mr. Robert Azibaola, Managing Director of Kakatar Civil Engineering Company Limited, had been detained since March 23 and was not likely to be freed soon.

The source said apart from Azibaola, the agency has also detained Mr. Dakoru Atukpa, who is the Executive Director in Kakatar CE Ltd.

The operatives had initially arrested and detained Azibaola’s wife but later released her on bail but held on to her husband and Atukpa, a development that has angered his lawyers.

An EFCC official familiar with the arrests, said both men were helping them with vital information.

The official said: “We arrested Mr. Azibaola Robert on March 23, 2016, when he came to honour our invitation. We also arrested his wife, but she has since been granted bail.

‘’The following day, we arrested Dakoru Atukpa, Executive Director of his company.  As we speak, both men are in our custody and are helping with vital information needed to nail the former President.”

It was learned that in a bid to keep the men in detention longer than allowed by law, the EFCC secured a court order to extend their detention.

Release or charge Azibaola, others to court, lawyer tells EFCC

Lawyer to the detained men, Gordy Uche, confirmed their arrests by the EFCC but asked the agency to urgently release or charge them to court if they had any justifiable reason to do so.

Uche, a Senior Advocate of Nigeria, SAN, said that apart from being detained, the operatives of the commission had also been conducting several searches on the offices of the detained men, carting away several documents.

The lawyers said he was reasonably informed that both men were being made to make statements under duress in a bid to implicate former President Goodluck Jonathan.

The senior lawyer said: “Yes, EFCC arrested my clients, Messrs Azibaola Robert and Dakoru Atukpa, MD and ED respectively of Kakatar CE and One-Plus, on March 23 and 24 respectively when they went to honour EFCC’s invitation.”

The spokesman for the EFCC, Mr. Wilson Uwujaren, could not be reached for comments on the detention of the men.