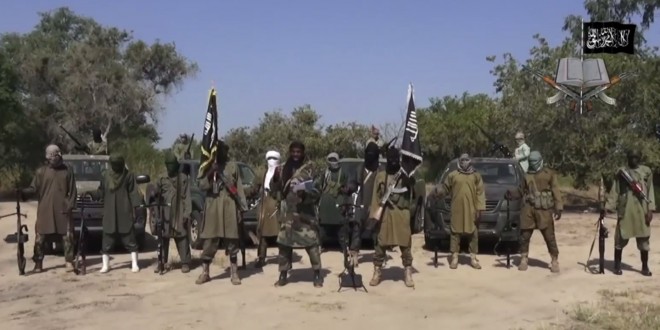 Security operatives on Friday made a major breakthrough in the intensified campaign against the Boko Haram insurgency by arresting the leader of the Ansaru Islamic Sect, Khalid Albarnawi.

The Acting Director Defence information, Brig. Gen. Rabe Abubakar, confirmed the arrest of the top wanted terror suspect to one of our correspondents on the telephone on Saturday.

Abubakar said that Albanarwi was second in command to Abubakar Shekau in the hierarchy of the dreaded Boko Haram Sect.

He attributed the arrest of Albarnawi to effective collaborative efforts among the various security agencies in the country.

The Acting Defence Spokesman said that with the arrest of the top leader of Ansaru, regarded as Shekau’s second in command, the days of the Boko Haram Sect were numbered.

According to him, the arrested terror suspect was cooperating with security operatives in the area of volunteering information.

However, Abubakar was not specific about which of the security agencies were in custody of the top terror suspect.

He called on Nigerians to cooperate with the security agencies in the ongoing onslaught on the Boko Haram by volunteering necessary information and intelligence to them.

He said, “I can confirm that he (Albarnawi) is in custody. It is a product of the existing synergy among the security agencies which led to this breakthrough in the war on terror.

“Nigerians should assist the security agencies with relevant information and intelligence, I can say that the days of Boko Haram are numbered.

“We have just confirmed that he has been nabbed and he is with the relevant agencies and as time goes, people would know how this kind of person was nabbed and it is due to the synergy existing among the security agencies.

“He has been arrested and he is with the relevant agencies and he is cooperating with giving information.

“He is the second-in-command as far as the Boko Haram hierarchy is concerned. So their days are numbered by the grace of God.”

An online portal, the Cable, had quoted Ahmad Salkida, a journalist, known for his access to some of the leaders of the Boko Haram has having said that Albarnawi was arrested by operatives of the Department of State Services in Lokoja and moved to Abuja on Friday.

The Ansaru leader, Albarnawi, who reportedly trained in the North African country of Algeria is believed to be highly  influential in the nation’s terror network.

Ansaru which was formed as a splinter group of the Boko Haram in January 26, 2012 and it claimed responsibility for the November 2012 attack on the Special Anti Robbery Squad Headquarters, Abuja.

Several top commanders of the Boko Haram were released in the attack which was praised in a YouTube video by Shakau’s in a message to  the ‘Soldiers of God in the Islamic State of Mali.’

Also, in the early hours of January 19, 2013, Ansaru attacked a convoy of Mali-bound Nigerian soldiers numbering 180 from the Second Mechanised Division, Ibadan, Oyo state, killing three soldiers among others.

On June 21, 2013, the United States Department of State had declared the leader of the Boko Haram Sect, Abubakar Shekau, and two of his lieutenants Abubakar Adam Kambar and Khalid al-Barnawi as ‘Specially Designated Global Terrorists’ under Section 1(b) of Executive Order 13224.

The State Department had said then that ‘Shekau is the most visible leader of Boko Haram based in northern Nigeria, Khalid al-Barnawi and Abubakar Adam Kambar, have ties to Boko Haram abs have close links to al-Qaeda in the Islamic Maghreb.’