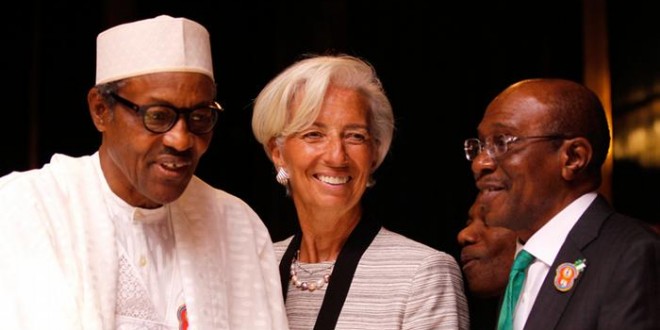 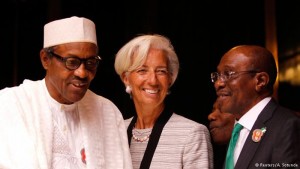 The international monetary fund (IMF) says Nigeria’s gross domestic product (GDP) would be worse in 2016 than it was in 2015, despite plunging to a record low in 2015.

The executive board of the IMF said it had concluded the article IV consultation with Nigeria, and projected a GDP growth of 2.3 percent in 2016 – lowest since democracy returned in 1999.

IMF said though “the non-oil sector accounts for 90 percent of GDP, the oil sector plays a central role in the economy”.

“Lower oil prices have significantly affected the fiscal and external accounts, decimating government revenues to just 7.8 percent of GDP and resulting in the doubling of the general government deficit to about 3.7 percent of GDP in 2015,” IMF said.

“Exports dropped about 40 percent in 2015, pushing the current account from a surplus of 0.2 percent of GDP to a deficit projected at 2.4 percent of GDP.

RESERVES WOULD PLUNGE TO $21.5BN

Nigeria’s foreign exchange reserve is currently fluctuating at an 11-year-low, but the IMF posits that it would fall further to new lows at about $21.5 billion before the end of the 2016 fiscal year.

“Foreign portfolio inflows slowing significantly, reserves fell to $28.3 billion at end-2015. Exchange restrictions introduced by the Central Bank of Nigeria (CBN) to protect reserves have impacted significantly segments of the private sector that depend on an adequate supply of foreign currencies.

“Coupled with fuel shortages in the first half of the year and lower investor confidence, growth slowed sharply from 6.3 percent in 2014 to an estimated 2.7 percent in 2015”.

The effect of all these was seen in the “weakening corporate balance sheets, lowering the resilience of the banking system, and likely reversing progress in reducing unemployment and poverty”.

They also agreed to the gradual increase in the VAT rate, further improvements in revenue administration, and a broadening of the tax base, as proposed by the Nigerian government.

Directors noted that the policy approach of expansionary monetary policy, together with a relatively fixed exchange rate and exchange restrictions had adversely impacted economic activity.