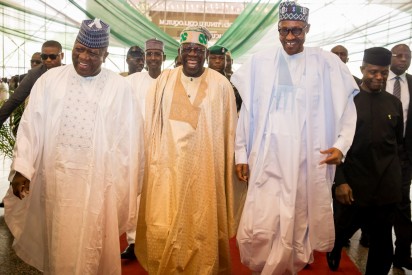 Aware of the present harsh economic realities, President Muhammadu Buhari on Tuesday said that his government is taking pragmatic steps to cushion the effects on Nigerians, assuring that there were better days ahead.

The president who chaired the 8th Annual Bola Tinubu Colloquium held at the International Conference Centre (ICC), Abuja spoke on the theme of the Colloquium 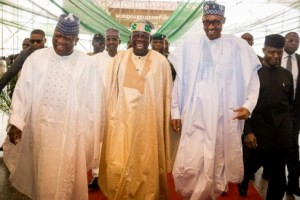 Eulogizing him, president Buhari said the former governor had shown commitment and zealousness to Nigeria’s growth. He stated that the government would continue to invest in human capital development. “There are very few patriots alive today that can match the commitment, zealous, creativity that Bola Tinubu has demonstrated in his contribution to national growth.

“In the coming months, Nigerians will see much more actions. Government will continue to invest substantially in human capital development and this is just the beginning. “We are going to hold ourselves accountable. We will measure results. There will always be some scepticism, some have even become disorientated and impatient enough to think that barriers are insurmountable.

Any one who claims great change is impossible can only look as an ordinary success”, he said. Apparently gauging the enormity of work to be done to better the lots of Nigerians, President Buhari urged all hands to be on deck. “We can achieve more with partnership that link up and scale up our respective efforts.

“I am declaring that we need a new approach that challenges more states and local governments, more organisation, companies and non governmental organisations and individuals, some of the younger people who are here to step up and play a role because government can not and should not do it alone. All hands should be on deck,” he said.

The president who commended the organisers of the Bola Tinubu Colloquium for the choice of the theme of the event on agriculture stated that the intention of the government was to create enabling environment that would bring viability on the economic potentials of the private sector. The President said: “We intend to organize an efficient market infrastructure that will make agriculture viable for investors.

We are providing an enabling environment so as to ensure certainty and predictability for the private sector. “We intend to also ensure that the market is fair and worth to transform small holder farmers from beggars to businessmen. “Further more, we are going to keep focusing on improved nutrition for children. We know the effects of hunger and poor nutrition can last a life time.