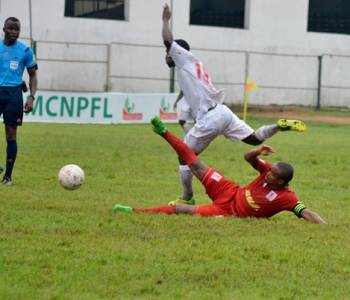 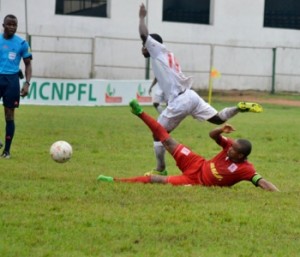 Rangers FC of Enugu, retained their  top position on the Nigeria Professional Football League table following a 2-1 win against Defending Champions  Enyimba of Aba at the Nnamdi Azikwe Stadium in  Enugu on Sunday.
Joseph Osadiaye gave Enyimba  the lead in the 20th minute, before Rangers responded with goals from Godwin Aguda and Chisom Egbuchulam to secure a famous win against the champions.
In Akure, Sunshine Stars defeated  Shooting Stars 2-1 to record their first win of the season.Dele Olorundare scored the curtain raiser in the sixth minute and the Owena Waves were punished for their profligacy in front of goal when Tope Orelope levelled scores in the 63rd minute.
Okiki Afolabi however got the winner for Solomon Ogbeide’s men in the 92nd minute.
Former champions, Kano Pillars secured a comfortable 2-0 win against FC IfeanyiUbah at Sani Abacha Stadium despite the absence of their reliable forwards Gambo Mohammed and Adamu Hassan who were both injured.
Prince Aggreh puts the Sai Masu Gida ahead in the 28th minute, his third goal of the campaign while Suleiman got the second two minutes after the break.The Pyramid City side are now unbeaten in six consecutive league matches, their longest run since June 2014.
Warri Wolves and Lobi Stars battled to a barren draw at the Warri City Stadium.
In Jos, Plateau United who are the only side yet to keep a clean sheet in the NPFL this season held MFM FC to a 1-1 draw. Adegboyega Micheal goal in first half added time was cancelled out by Reuben Bala’s 49th minute strike.
In Owerri, Heartland edged out Giwa FC 2-0.Emeka Atuloma volleyed the ball home in the 54th minute, while Roland Koffi doubled the advantage in the 90th minute to give his side the win, their third of the campaign.
Abia Warriors maintained their unbeaten streak as they beat hard fighting Niger Tornadoes 1-0 in Umuahia. Chisom Chikatara struck seven minutes from time to hand his side the win.
El-kanemi Warriors were in destructive mood as they beat fellow northern side, Nasarawa United 3-0 in Katsina,Yakubu Auta (11th min), Daniel Japhet (87 minutes) and Ohanachom (90 minutes) got the goals for the Maiduguri- based side.
Rivers United picked their first away win of the season courtesy of a 3-2 victory against Ikorodu United at the Onikan Stadium, Lagos.
Ivorian forward, Guy Kuemian, set his side on the road to victory when he scored the curtain raiser in the ninth minute.
The home side however equalised five minutes later. Nonso Okonkwo put the guests ahead on 20 minutes, while Wilson Andoh increased the lead in the 31st minute.
Ifegwu Ojukwu got one back for Ikorodu United 14 minutes before the end of the game, but they failed to get the equalising goal.It was Rivers United’s first away victory in the league since March 2012, ending a run of 71 away games without a win.
Akwa United went three games without scoring, their longest goal drought since May 2015 following a 0-0 draw against Wikki Tourists in Bauchi.