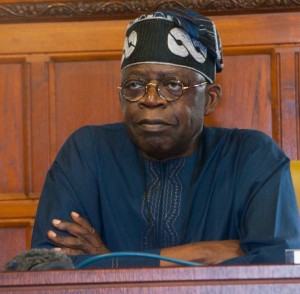 Minister of State for Petroleum Resources, Mr. Ibe Kachikwu, Saturday got a tongue-lashing from the national leader of the ruling All Progressives Congress, Asiwaju Bola Tinubu, over his recent comments on the lingering fuel scarcity in the country.

The former Governor of Lagos State took a swipe at the minister, who is also the Group Managing Director of the Nigeria National Petroleum Corporation, for saying he was not a magician who could end the scarcity of Premium Motor Spirit, also known as petrol.

The APC leader stated that the minister was answerable to Nigerians and not the other way round.

Tinubu stated this on Saturday in a statement titled, ‘Kachikwu Needs to Know That Respect and Good Performance Will Do What Magic Cannot.’

Referring to the minister, Tinubu said he believed a member of the President Muhammadu Buhari-led government “has strayed from the progressive calling required of this administration.”

Kachikwu had on Wednesday, while speaking with State House correspondents shortly after he led a joint delegation of the Petroleum and Natural Gas Senior Staff Association of Nigeria and the Nigeria Union of Petroleum and Natural Gas Workers to meet with Buhari at the Presidential Villa, Abuja, said since he was not a magician, the fuel queues could not be eliminated with a magic wand.

He added that despite the efforts being put in place by the Federal Government, fuel queues might not be completely eliminated until about two months (May).

The minister noted that with the reality on the ground, it was by sheer magic that the country had the amount of products it currently had at the filling stations.

However, Tinubu, on Saturday, stated that there might be no economic matter more difficult to unravel and more sensitive to the purse of the average person than the current fuel scarcity.

The APC leader said despite that, he was confident of progress because he knew the commitment of the President to resolving the issue.

“I make no attempt to hide it. I am an avid and partisan supporter of this government and of the progressive policies of the party, the APC, upon which this government is based,” the ex-governor stated.

Tinubu added, “With that, I do reserve the right and the duty as a Nigerian to voice my opinion when I believe a member of this government has strayed from the progressive calling required of this administration. I do this because my greater devotion and love are for this nation and its people. Party and politics fall secondary.

“Much public ire has been drawn to the statement made by the Minister of State (for Petroleum Resources) Ibe Kachikwu that he was not trained as a magician and that basically Nigerians should count themselves fortunate that the NNPC under his stewardship has been able to bring in the amount of petrol it is currently doing.

“Perhaps the statement by Kachikwu was made in a moment of unguarded frustration or was an awkward attempt at a joke. Whatever the motive, it was untimely and off-putting. The remark did not sit well with the Nigerian people; they were as right to feel insulted as the minister was wrong to have said such a thing.

“The fuel shortage is severely biting for the average person. They are forced to remain in lines far too long — for too much time — to pay too much money for too little fuel. This is no joking matter. Livelihoods and people’s welfare are at stake.

“With so much on the line, Kachikwu’s flippancy was out-of-line. He was basically telling Nigerians that they should be lucky that they are getting the inadequate supply they now suffer and that they should just be quiet and endure the shortage for several weeks more.”

Saying Kachikwu’s intervention was unhelpful, the APC leader said it rather panicked and disappointed the public as to the duration of the crisis.

“It insulted the people by its tonality. He spoke with the imperious nature of a member of the elitist government the people voted out last year and not the progressive one they voted in,” he added.

Tinubu also said Kachikwu must be reminded that he was not coerced to take the job, adding that the minster accepted the job and its responsibilities “knowingly.”

The ex-governor said the NNPC GMD must also remember that he does not own the corporation and that the NNPC was not a private company that owes nothing to the public except the duty of fair dealing.

“In talking to us in such a manner, he committed an act of insubordination. If he had talked so cavalierly to his boss in the private sector, he would have been reprimanded or worse. If wise, the man should refrain from such interjections in the future.

“As his ultimate bosses, the people have a right to demand the requisite performance and respect from him.  He should apologise for treating them so lightly in this instance.”

The APC leader noted that as Kachikwu’s portfolio was a strategically important one, the minister needed to re-establish the correct relationship with the public.

He said Nigerians no longer felt Kachikwu was working for their optimal benefit as their servant. “Instead, he seems to be standing above them, telling them to take it or leave it,” Tinubu added.

The politician stated that for the minister’s policies and stint in office to be successful and of help to the government, he (Kachikwu) must have the support and belief of the people at this tough time.

Tinubu said the NNPC boss must talk to them in a way that they believe he seeks their best interest and understands the hardship weighing upon them.

“He must ask them to work with him and, perhaps, to endure a bit longer but with the knowledge that he is working to resolve this matter as fast as he can and as permanently as possible; that he is dedicated to the position that once these current lines are gone, never again shall they reappear, as long as he has any influence in the matter.

“To do this requires no magic or training in that strange craft. It requires empathy, compassion and the willpower to forge a better Nigeria. These must be the common trademarks of those serving in a progressive government, for these attributes are integral parts of the spirit and ideals upon which the APC was founded,” Tinubu added.