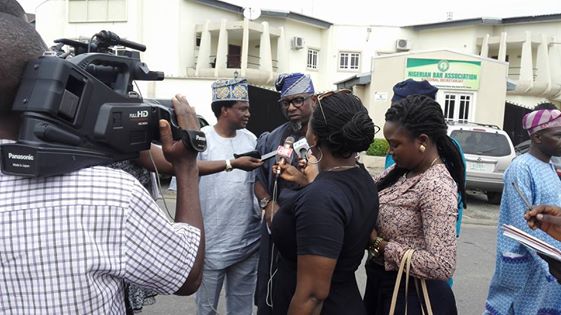 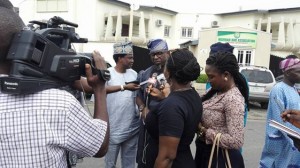 Members of the Ekiti State House of Assembly have cried to the Nigerian Bar Association and Amnesty International over the refusal of
the Department of State Services (DSS) to obey the court order, directing the immediate release of a member of the House of Assembly,
representing Efon Constituency, Hon. Afolabi Akanni.

The lawmakers, who could not control their emotions while addressing the press, said it was obvious that the DSS wanted Hon. Akanni and
some other members of the House dead so that they can be replaced by members of the All Progressives Congress (APC).

Hon. Akanni, who was paraded before the press last week Thursday to debunk the rumour of his death was whisked away from the House of
Assembly complex on March 4, 2016, during an invasion by armed men of the DSS and had been held in DSS custody in Abuja without access to
his lawyers, doctors and family members.

On March 11, a Federal High Court in Ado-Ekiti ordered that Hon Akanni be released immediately or be brought to the court in Ado-Ekiti on
Wednesday, March 16, 2016, but the DSS refused service of the court order when the Court Bailiff, Araromi Ademola went to the DSS office
in Ado-Ekiti, prompting an order that the order be served through newspaper advertisement.

Despite that the order was published in the Nigerian Tribune of last week Thursday as ordered by the court, the DSS claimed that it was yet
to see the order.

Deputy Speaker of the House of Assembly, Hon Segun Adewumi, Chairmen House Committee on Information and Health, Hon. Gboyega Aribisogan and Hon (Dr) Samuel Omotoso respectively were at the NBA national headquarters and the Amnesty International office in Abuja to submit
petitions.

They also submitted copies of the court order, newspaper advertorialin which the order was published among other documents.

The lawmakers, who addressed the press after submitting the petitions, raised the alarm over the health condition of the detained lawmaker,
saying; “Hon. Akanni said on Thursday, when he was paraded before the press that he slumped twice and no medication was given to him even
when he asked for drugs.”

Hon (Dr) Omotoso said; “Since it is now obvious that they cannot coerce us into impeaching our governor and leader, Ayodele Fayose, it
appears that these people are now working on a sinister theory of snuffing life out of Hon Akanni and some of us so as to pave way for
the conduct of bye-election through which they hope to rig APC members into the House of Assembly.

“We have therefore come here to alert the NBA and the Amnesty International of this blatant disregard for orders of our courts by
the DSS and infringement on the fundamental rights of our members, especially Hon Akanni, who is dying in detention.

“We are putting the entire world on alert that should anything  untoward happen to Hon Akanni, who is being detained without access to
his doctors despite being terribly sick and any of us, the DSS and by extension, the federal government should be held responsible.”

Share
Previous Arrest, Interrogate and Detain ,Wike Over Assassination Attempt On Peterside, others – APC
Next Rivers Violence Is Condemnable And Unacceptable- Okupe