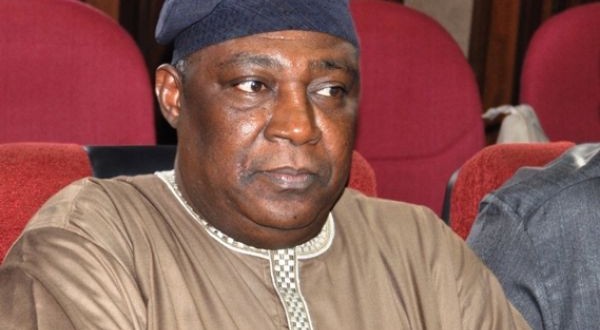 The anti-graft agency said this when it opened its case against the ex-CDS before a Federal High Court in Abuja.

The EFCC is prosecuting Badeh alongside a firm, Iyalikam Nigeria Limited, on 10 counts of money laundering bordering on alleged fraudulent removal of about N3.97bn from the NAF’s account.

The commission alleged that Badeh used the fund to buy and develop landed assets in Abuja for himself and his two sons between January and December 2013.

Badeh served as the Chief of Air Staff and later became the Chief of Defence Staff till he retired from the military last year.

He attended the Wednesday’s proceedings from prison and returned there after the court session as he had yet to meet the N2bn bail condition imposed on him by the court.

Testifying as the first prosecution witness on Wednesday, a former Director of Finance and Account of the NAF, Air Commodore Aliyu Yishau (retd.), narrated how he routinely helped Badeh to divert the sum of N558.2m by converting it to its dollar equivalent.

He said he usually handed the dollar equivalent of the money to Badeh at his official residence on a monthly basis.

Yishau, who was led in evidence by the lead prosecuting counsel, Mr. Rotimi Jacobs (SAN), said the diversion took place from September  2012 to December, 2013, when Badeh served as the Chief of Air Staff.

He said the sum of N558.2m was drawn from the Personnel and Emolument account as fund meant for “general administration of the Chief of Air Staff”’.

Yishau told Justice Okon Abang on Wednesday that he aided Badeh to acquire and develop landed assets in Abuja with the N558.2m, which was being drawn  from the Personnel Emolument account of the NAF on a monthly basis.

He said the N558.2m was part of the excess in the N4bn, which the NAF received monthly in the personnel and emolument account after the salaries and allowances of permanent and temporary staff must have been paid.

He said, “Although, I cannot remember the figure each year, we received a little about N4bn monthly for the personnel emolument allocation account. However, our total wage bill as of that time was above N2bn monthly.

“The balance of the personnel emolument was usually about N1.6bn to N1.7bn, depending on the month. Out of this amount, the sum of N558,200,000 was for  the general administration of the Chief of Army Staff monthly.

“Concerning the N558,200,000, the instruction was always given to me as the Director of Accounts and I passed same instruction to the Finance Officer at the headquarters of NAF camp, Abuja.

“The money is changed to dollar, when this money is changed, it was brought to me and I would take it to the Chief of Air Staff, Air Chief Marshall Alex Badeh, at his official residence in Niger Barracks.”

He said there were no documents showing the monthly deliveries of the dollar equivalent of the N558.2m to Badeh because it was not the practice in the military to request a written agreement.

He said, “As military officers, we don’t request for any agreement. However, in some cases, I told the finance officers to meet me at the Air House in Niger Barracks with the money so that he could see when I handed over the money to the Chief of Air Staff, Air Chief Marshall Alex Badeh.

“The only instructions that were in writing were those requests forwarding instructions from branches and units for approval. When the approvals are given, they are forwarded to my office for necessary payment action.”

He said he did not directly benefit from the monthly diversion of the N558.2m but that Badeh helped him to complete the landed assets he was constructing in Abuja and Kaduna.

According to him, all the said landed assets had been marked by the EFCC.

The witness, who said Badeh was the second Chief of Air Staff that he served as the Director of Finance Accounts, added that Badeh’s predecessor, M. D. Umar, was still being investigated by the EFCC.

Yishau explained that Badeh provided the dollar equivalents for the purchase of the various properties, which he assisted him to locate in various parts of Abuja.

The witness said he helped Badeh to purchase the property allegedly at No. 6, Ogun River Street, Off Danube Street, Maitama, Abuja, with dollar equivalent of N1.1bn.

He added, “Sometimes in January 2013, when I was taking the normal amount to him (Chief of Air Staff) in dollars, he directed that we should pay for the house. So he brought out the balance in dollars and made up the equivalent of N1.1bn.

“I gave the money to Barrister Hussein Umar and asked him to pay for the house. After the payment, it took sometime before the necessary documents were prepared. But Hussein Umar asked me the names to put on the documents. I asked the Chief Air Staff under which name he wanted the documents to be prepared.”

Share
Previous N’Assembly Committee Detects Fresh Errors In 2016 Budget
Next Revenue From Non-Oil Exports Down By 58% To $4.3bn — CBN