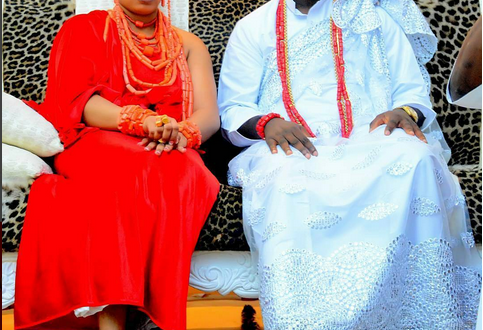 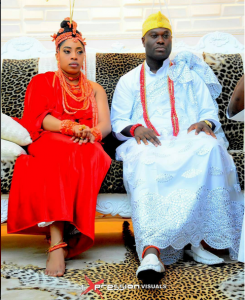 It was a colourful blend of two cultural heritages, as the Ooni of Ife, Oba Adeyeye Enitan Ogunwusi, Ojaja II, was on Saturday betrothed to his new wife, Wuraola Obanor, at a traditional marriage held in Benin, the Edo State capital.

The wedding rites were performed in the traditional Benin culture at the residence of the bride on Ewere Street, Etete, in Oredo Local Government Area of the state.

Although the Ooni was not physically present, he was, however, represented by his father, Omooba Oluropo Ogunwusi.

The grand event was attended by relatives, dignitaries and friends drawn from the Ife dynasty and the bride’s family, many of whom were dressed in white and purple attires.

Wuraola was presented to the Ooni’s family by her father, Mr. Williams Obanor, at about 12:30pm, after her bride price was paid in the presence of her family.

Although the amount paid as the bride price was not disclosed at the event, our correspondent learnt that the customary price in Edo is N24, from which the bride’s father will take a part and return the rest to the groom’s father.

In accordance with the Benin wedding rites, supervised by the Esogban of Benin Kingdom and other chiefs, she was placed on the laps of the Ooni’s father, after seven counts.

She was also presented with gifts from her immediate family, including  a local mortar, broom and a pot, while traditional dancers from Benin and Ife entertained the guests.

The father of the bride described the wedding as a historic event in the family of the Obanors.

He said, “I feel very happy. When you get a good thing in life you must be grateful to God because this is all the work of God. I never thought it could so because I never thought that, one of these days, I will become very close to the Ooni of Ife. Now that it has happened, I feel grateful to God. So, I wish her a happy marriage.”

He also urged his daughter to live peacefully and in harmony with her husband.

“My message for her is that she has to been very polite, obedient and understanding, believing much in God. And whatever she needs, she will get it. If you have any problem with your husband, don’t let a third person to hear of it; go to him and both of you should resolve the problem together amicably.

“We have a lot of gifts for her. But in Benin, we don’t believe in giving a car or cash. We have what goes by tradition. That is, we have the local mortar, broom and the pot. These are some of the things we normally send and at least a box of cloths,” he added.

The two families and their guests later proceeded to Edo Hotel on Okada Avenue, Benin, for a grand reception. The new bride and the monarch’s father were driven to the venue in a limousine.

Chairman of the event, a former Deputy Governor of Lagos State, Mr. Femi Pedro, thanked the guests for their presence.

Meanwhile, the Ooni of Ife, Oba Adeyeye Ogunwusi, is expected to move into a new apartment inside the palace on Saturday with his new wife.

Our correspondent gathered that the monarch has not been sleeping inside the palace since he was installed the Ooni of Ife.

Oba Ogunwusi had embarked on massive rehabilitation and reconstruction of nearly all the structures inside the expansive palace known as Ile Oodua.