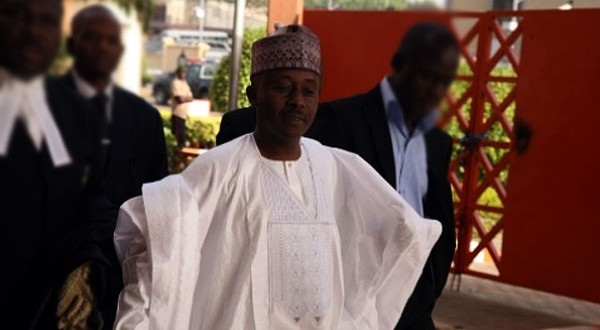 I Collected $100,000 From Otedola For Farouk Lawan – Emenalo The Clerk to the then House of Representatives Ad hoc Committee on Fuel Subsidy, Boniface Emenalo, on Monday told a Federal Capital Territory High Court, Lugbe, how he collected $100,000 from billionaire businessman, Mr. Femi Otedola, as part of the alleged $3m bribe promised to the then Chairman of the committee, Farouk Lawan.

The Independent Corrupt Practices and other related offences Commission is prosecuting Lawan for allegedly “corruptly” collecting $500,000 out of the $3m bribe he requested from Otedola in exchange for the removal of the name of the company of the businessman from the list of firms indicted by the House committee for allegedly abusing the fuel subsidy regime in 2012.

Emenalo, testifying as the first prosecution witness before Justice Angela Otakula, on Monday, said he collected the sum of $100,000 from Otedola in $100 bills.

He said, “I came across Femi Otedola during this assignment on April 24, 2012. I received persistent calls from Mr. Otedola in the morning and reported to Lawan and he asked me to play along with him, that he was with him (Otedola) the previous night.

“When Otedola called again, he asked me to come over to his house. He gave me the description (of his house). When I got there, he also confirmed that he was with my chairman the previous night. He gave me two bundles of dollar bills in $100 denomination. Each bundle was $50,000 making it $100,000 that were not converted.

“When I got back to the office, I wrote a memo forwarding the money to my chairman that same April 24, 2012, which he took from me.”

A copy of the memo was tendered before the court and marked Exhibit PW1 C.

The defence, led by Mike Ozekhome (SAN), did not object to the admissibility of the document.

Under cross-examination, Emenalo told the court that it was surprising when he read in the newspapers that Otedola actually gave him $120,000.

However, Ozekhome sought an adjournment to serve the prosecution with a notice to produce an additional statement made by the witness as contained in the prosecution’s proof of evidence.

The judge adjourned till April 12 and 13, 2016 for continuation of trial and cross-examination.

Justice Otakula had, on February 2, overruled the objection of the defence counsel, Mr. Sekop Zumka, to the admissibility of the documents over non-payment of the certification fee.

Emenalo was initially charged along with Lawan with respect to the bribery charges.

Both of them were first arraigned before Justice Mudashiru Oniyangi, then of the FCT High Court on February 2, 2013.

But a later amendment to the charges by the ICPC saw Emenalo’s name removed as a defendant.

Lawan is now the sole accused person in the case.

The case was re-assigned to Justice Adebukola Banjoko after Justice Oniyangi was elevated to the position of a Justice of the Court of Appeal.

The case was further re-assigned to Justice Otakula in the Lugbe Division of the FCT High Court following the withdrawal of Justice Banjoko from the case in November 2014.

The amended charges, now comprising three counts instead of the previous seven, indicate that Lawan corruptly asked for $3m from Otedola and did corruptly collect $500,000 from the businessman.