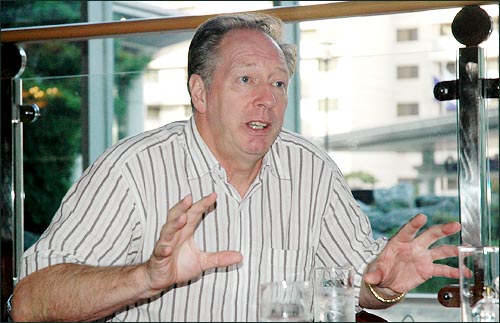 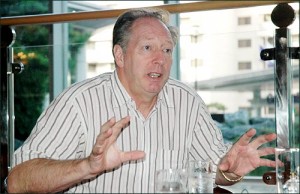 After leading Nigeria to Atlanta 1996 Olympic Games football medal win and silver finish at 2000 Nations Cup, Dutch coach, Jo Bonfrere says he is interested in returning as Super Eagles coach. He speaks to Completesportsnigeria.com’s SAB OSUJI from his base in the Netherlands. Bonfrere also throws his weight behind NFF President, Amaju Pinnick’s declaration that it’s over for local coaches in the Super Eagles. Bonfrere reiterates that Nigeria’s inability to surpass his achievement in 1996 was because the FA has been hiring ‘wrong’ coaches. Excerpts…

Coach Bonfrere, how are doing today out there in Holland?

I’m okay. What about you?

I’m fine. Its exactly 20 years since you led Nigeria to win the gold medal at the 1996 Olympic Games in Atlanta, Georgia, USA – the first by any African nation till now. Tell us, what fond memories do you still have of that glorious moment even as we prepare for another Olympic Games this year?

But since then, Nigeria have not replicated that performance again even though Samson Siasia came close in 2008 in Beijing, China….

(Cuts in) It’s because you (Nigeria) have not taken a good coach. All the coaches you have taken since that time, both foreign and local, have not been good ones. Since I left, no good coach has come to work in Nigeria.

And what could be responsible for this? Is it that there are no good coaches in both Nigeria and Europe or could  the problem has to do with the selection process?

Of course, I know Nigeria very well; I worked there for a long time to understand the players’ and the officials’ thought processes. I understand that Nigerian players like to play football and that was why I worked very well with the players. If you don’t understand the players, their mentality, then it will be very difficult for any coach to work with them and get the best from them. Your local coaches don’t always succeed because you have too many people who put pressure on them and again  international football is beyond the local coach.

Just last week, Super Eagles coach, Sunday Oliseh, resigned his appointment as Nigeria manager. Are you aware of this?

I’m aware because some people from Nigeria called me to say that the Super Eagles have no coach again and that Nigeria is looking for a new coach.

Yes, Nigeria are looking for a new coach, a foreign coach for that matter. Is Bonfrere Jo interested in handling the Super Eagles again?

I’m interested of course, because I enjoyed working in Nigeria. it’s because you have a whole lot of good players with technique, who love to work very hard and always want to play. The most important thing, as a foreign coach, I have to teach the players how to play good football. Certainly, I’m interested (in coming back to Nigeria as Super Eagles coach). Of course, I would like to go with Nigeria to the African Cup of Nations; I would like to go with the Super Eagles to the World Cup in Russia 2018.

Have you been contacted by anybody for the Super Eagles vacant coaching job?

No, but I was told by a friend in Nigeria that Oliseh has resigned.

Sunday Oliseh once played under you in the Super Eagles. He also played under your tutelage at the U-23 national team level when you won the Olympic Games in Atlanta, 1996. When he was appointed Super Eagles coach, what was your perception of him? Did you think he was going to succeed?

No! Before you work at that level and succeed you must first of all have the experience. Oliseh did not have that, so it was going to be very difficult.

The Super Eagles will on March 25 take on Pharaohs of Egypt in Kaduna in a crucial 2017 African Cup of Nations qualifier. What’s your take on that game considering Samson Siasia is just a transit manager for the Eagles following Sunday Oliseh’s resignation last week?

I’ve worked in Egypt before and I know that Egypt is always strong whenever they are playing at home. But on away grounds, the Egyptian Pharaohs are not that strong. So you have to make a good tactical plan if you are playing against Egypt. The match is about four weeks away so the coach must draw up a good tactical plan on how we can play Egypt or how we can beat Egypt. And I think it (victory) is possible with Nigerian players not ever afraid to play in foreign countries.

Some top level Nigerian players abroad like goalkeeper Vincent Enyeama and Emmanuel Emenike have opted out of international football recently. Do you think the two players are still needed in the Super Eagles and if yes, is there a way they could still be recalled back into the national team?

That is the job for the coach. It is the duty of the coach to build a strong squad, identify those he needs to get the job done and bring them along. In this case, the players and his backroom staff or his assistants. What he thinks

will give him result is what he would like to do. The important thing is the success of the team and Nigeria and not only that of the coach. So if he believes in bringing them back, why not?

There is this brewing misunderstanding between the Nigerian FA and local coaches. The FA President categorically said recently they have no confidence in the local coaches and that they will no longer be considered for Super Eagles coaching job. Do you think it is proper for the FA to take that position?

(Cuts in) Nigeria have won the Nations Cup three times, one by Keshi. Who won the other two, Nigerian coaches or foreign? My position is foreign coaches are better in position to win than local coaches.

Do you think the Super Eagles will qualify for the AFCON in Gabon next year considering we’re second behind Egypt in Group H?

Yes, you’re two points behind Egypt. And I think it is possible because if you have a good plan, you can win. I’ve worked in Egypt,  I know how they play football in Egypt. I know a little bit of how they will play. So if you take out Egypt, you’ll be at the Nations Cup.

Before I let you go, what do you think the Eagles must do to ensure victory over Egypt in order to qualify for the 2017 AFCON in Gabon?

There must be good relationship between the Super Eagles coach and the FA. The coach must ensure he selects the best players for the match. He must adopt good technical plan and the players must be focused, mentally alert throughout the 90 minutes. In Egypt, they must avoid distraction and provocation and be able to take their chances.
Courtesy of www.completesportsnigeria.com