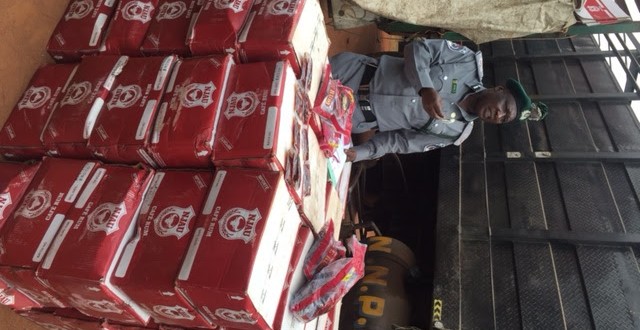 March 4, 2016 Comments Off on Customs in Owerri Seize N219m Contraband from Smugglers 7 Views 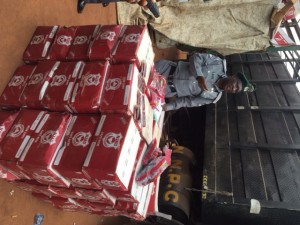 It was ‘bad market’ for suspected smugglers operating within the axis of Owerri, Imo state, when Customs operatives swooped on them and impounded a 40 feet container load of two 2,000 cartons of imported frozen poultry products, cleverly concealed by 3,300 crates of Lacasera drinks, with a Duty Paid Value (DPV) of N53,300,000.

The seizures were made by officers of the Federal Operations Unit Zone ‘C’ Owerri, an anti smuggling arm of the Nigeria Customs Service (NCS) who intercepted the goods on the Benin express way – Edo State.
Informed customs sources said the products were suspected to have been preserved with chemicals meant for the preservation of dead bodies hence they may be harmful if consumed.

Customs Area Controller in charge of the Unit, Comptroller Haruna Mamudu, said the interception was made in sequence to an earlier seizure of one 1,500 cartons of the same hazardous products in January, 2016 by the unit.

Comptroller Mamudu while briefing newsmen at the Customs house premises in Benin Edo state, explained that the recent seizure of imported frozen poultry products coincided with the end of February month report, which according to him, offered the Unit 27 seizures with a DPV of N219,239,208.21.
Comptroller Haruna said 12 suspects were also arrested while N65, 434,441 underpayment was equally recovered during the month.

Comptroller Haruna stressed the consequences of continued importation and consumption of unauthorized products in the country, and regretted that such products easily come in because of their relatively cheap prices which usually attract members of the public, especially the youth.

He further warned of the potential harm inherent in the human consumption of poultry products that were treated with such chemicals often used in preserving human corpse by medical experts.

The customs chief later handed over the impounded fake drugs to officials of the Edo State Director of the National Agency for Food, Drug Administration and Control (NAFDAC), Mr. David W. West, in the presence of officials of other sister agencies’.

He however warned those still engaged in the illicit act of smuggling as well as their collaborators and agents to desist forthwith in their own interest, or be prepared to face the full weight of the law.

While noting that smuggling of contraband goods had remained unabated in the country despite stiff penalties for culprits arrested the customs chief urged well meaning Nigerians with useful information about smugglers to make them available to relevant government agencies for necessary action.

He maintained that the NCS in pursuance of the policy of zero tolerance to corruption by the Federal Government would ensure that there is no hiding place for smugglers.

“Zero tolerance to corruption is now on. It is being pursued with vigor by the Comptroller-General of Customs, Col. Hameed Ibrahim Ali (Rtrd.) and we are leaving no stones unturned to ensure it success!” he said.