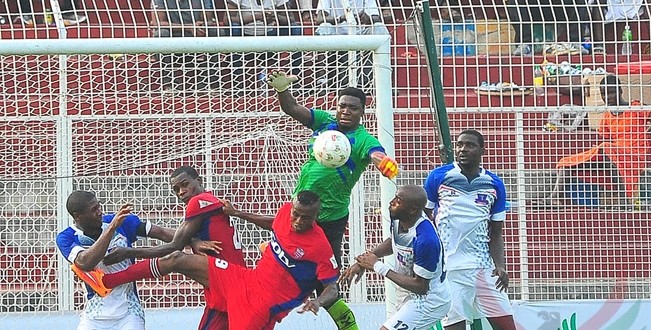 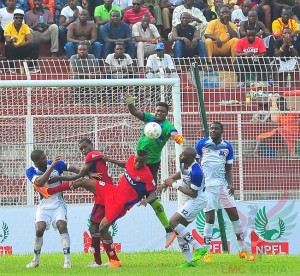 Lobi Stars have gone top of the Nigerian league table courtesy of the brace fired by their striker Tony Okpotu on Wednesday. The strikes ensured a 3-0 thrashing of visiting El Kanemi Warriors.

Abia Warriors were table toppers until Wednesday afternoon but the Benue State team have now taken over with nine points from four games.

Okpotu, a Beninese import opened the scoring in the fourth minute from the penalty spot after he was fouled. The attacker got the second goal with another spot kick in the 55th minute. Super Eagles player Bernabas Imenger scored the third goal for Lobi.

In Lagos MFM bounced back from their loss 3-0 to Shooting Stars in Ibadan on Saturday to compound the woes of Sunshine Stars, who they beat 2-1 at the Agege Stadium.

Goals from Musa Newman and Stephen Odey gave the newly-promoted MFM their third win in the league against 10-man Sunshine, who had Sunday Abbey sent off in the second half of the match.

MFM have now gathered nine points from their four matches to sit second in the log behind Lobi, who have the same number of points but with superior goal difference. Sunshine, however, are 17th in the table with one point from three matches.

According to the League Management Company’s report, the match lived up to its expectations as one of the day’s tough matches, given that the two teams were gunning for a victory after both had suffered losses at the weekend.

MFM took advantage of their home support and were all over their visiting opponents, who also tried coming into the match with several attempts which the hosts contained. The hosts however took the lead in the 25th minute through Newman.

Sunshine rallied for an equaliser and their pressure paid off in the 38th minute when Stanley Dimgba assisted Kadiri Samad for the equaliser. The second half saw the two sides pushing for a winner and the hosts got it in the 86th minute through Odey.

Sunshine were reduced to 10 men in the 90th minute when Abbey cupped a second bookable offence. They will play their next match against IfeanyiUbah at home while MFM will be away to Ikorodu United at the Onikan Stadium on Saturday.