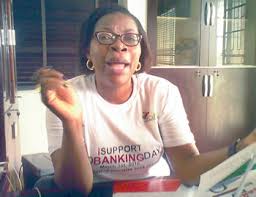 Nigerian bank users are set to shun banking halls today, Tuesday, to protest infringements on their rights by operators in country’s financial sector.

A consortium of consumer rights groups, led by the Consumer Advocacy Foundation of Nigeria (CAFON) had, few days ago, called on Nigerians to go on ‘bank fast’ to protest banks’ excessive charges in the country.

“We’ve been in bondage for so long, and the more individuals and groups begin to protest these things, the better,” argued Kadri.

According to him, despite the fact that his small scale fishery farming had not attracted the required financial support from the banks, his corporate account had always experienced different surcharges from his bankers.

Corroborating Kadri’s claims, the convener of the action, Sola Salako, explained that the action is not intended to run any financial institution down; since their existence is crucial to the survival of the nation’s economy.
Meanwhile, the National President, Constance Shareholders Association of Nigeria (CSAN), Shehu Mikail, has urged all bank users to join ‘No Banking Day’ protest today.

Mikail made the plea in an interview with the News Agency of Nigeria (NAN) in Lagos, on Monday.
“Apart from the above, there are other silent charges administered by Nigerian banks,” he said.

He said there was need to alert the Federal Government on these excessive charges by Nigerians banks.

In preparation for the protests, some banks have already put measures in place to ensure that the protest goes smoothly.