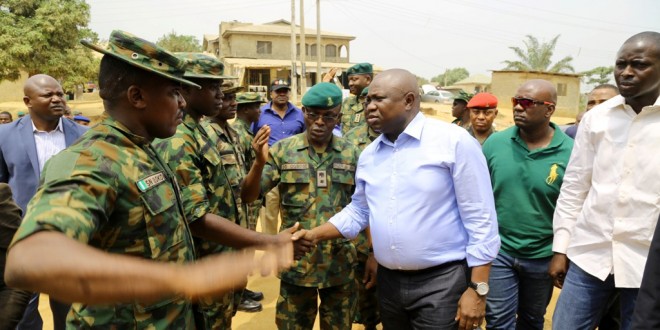 ‘Use Force If Necessary On Vandals, Criminals’- Ambode

February 16, 2016 Comments Off on ‘Use Force If Necessary On Vandals, Criminals’- Ambode 33 Views

The Governor who spoke during a security inspection tour of Owutu, Ishawo, Oke Oko and other adjoining communities in Ikorodu West Local Council Development Area (LCDA) of the state, also warned criminals to stay off the streets of Lag os, saying that his government will stop at nothing to ensure the restoration of peace in the area, which had hitherto being disturbed by the activities of vandals and miscreants.

The Governor not only requested for the operation, but also briefed the President Muhammadu Buhari as well as the Chief of Defence Staff on the criminality going on in the area, after which they approved the military operation.

Thus, the visit by the Governor, who supported the military operation monetarily, was a follow up  to boost the morale of the security forces and then see the possibility of opening up the road as a permanent solution to dislodging all criminal activities in that axis.

The Governor, who made a brief stop at the Little Palace Hotel, where vandals once used to plan and execute their criminal activities before it was taken over by a combined force of the Nigeria Army, Navy, Airforce, the DSS and the Police under the code name, ‘Operation Awatse’, expressed deep regret over the loss of three officers of the operation, assuring that his administration will give the force the necessary support to wage war against the vandals.

“I also want to commiserate with our security agencies most especially the Nigerian Navy for the loss of three men last week. I like to use this as a platform to give a very strong warning to vandals and even cultists that are parading themselves on the street of Lagos.

“Just recently, we heard that the fingers of some of our men in the Task Force were chopped off by some hoodlums so to speak. I’m using this platform also to direct our security forces that they should go ahead to use appropriate force in mitigating against such incidences next time and this is in the overall interest of all of us. While we make sure that we are upholding the rule of law. We would not fold our arms and allow some miscreants to disturb the peace of Lagos”.

“If we sit down in our office, we would not be able to appreciate the extent of the problem here. People here have been living in fear in the past. We want permanent peace in the area and that is why we are coming after the vandals and criminals. Let me use this opportunity to warn criminals to get off the streets of Lagos and get off the creeks,” he said.

The Governor while appreciating the officers whose presence in the area had reduced the activities of the vandals and hoodlums terrorising residents, said he will ensure that all necessary apparatus and welfare for the officers is made available to boost their morale in the line of duty.

Earlier, Lt Col. Julius Ogbobe, Commanding Officer of the Operation Awatse, who briefed the Governor and his entourage on the operational base of his squad, said they dislodged the vandals from the Little Palace Hotel on October 10, 2015, which has since led to the recovery of over 2000 by 50 litres gallon of illegal products, 36 vehicles while 15 suspects were also arrested and handed over to the Nigeria Security and Civil Defence Corps (NSCDC) for prosecution.

The Governor who also drove several kilometres to inspect the state of the road, said the plan of government is to link up the community with Arepo and Kara, expressing optimism that if the road network is accessible, it would go a long way to reduce the activities of vandals in the area.

He therefore promised to champion collaboration for the construction of a link bridge among Lagos, Ogun and the Nigeria National Petroleum Corporation (NNPC) to ensure that Ishawo, Oke Oko communities is linked to Kara and Arepo via the creek.

Addressing community leaders and residents at a brief town hall meeting, said although his visit to the area was to access the security situation, he also took note of the need to open up the community so as to curtail the activities of pipeline vandals to the bearest minimum.

The Governor was also concerned about the complains of the residents on the lack of schools, healthcare centres and public infrastructure in the community and promised to build a new primary and secondary school in the area as well as provide a well equipped primary healthcare centre.