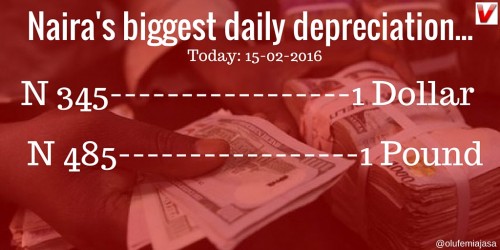 Naira Falls to N345 To 1$ In Parallel Market 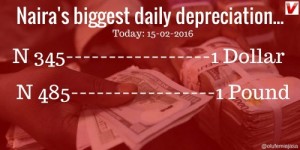 The naira, yesterday, suffered its biggest daily depreciation against the  dollar  as it exchanged for N345 to a dollar in the parallel market.

This represents N20 depreciation when compared with the closing exchange rate of N325 per dollar in the market on Friday. But the naira was relatively stable at the official interbank foreign exchange market as the interbank rate stood at N197.47 per dollar at the close of business, yesterday.

The naira also depreciated by N45 against the British pound as the parallel market exchange rate rose to N485 per pound, yesterday, from N340 on Friday.

Bureaux de Change sources, who confirmed the development to Vanguard, attributed the sharp depreciation to persistent scarcity of the dollar and pound sterling in the market.

According to an Abuja-based BDC operator, who spoke on condition of anonymity, “the market is experiencing huge demand for dollars but there is no supply. Even those who have dollars are not willing to sell. The way things are going, the rate might reach N350 per dollar before it stabilises.”

This development widened the gap between the interbank rate   and the parallel market rate to N147.53 per dollar from N127.53 per dollar last week. The naira has been on steady decline since January 12, 2016, when the Central Bank of Nigeria, CBN, stopped weekly dollar sale to BDCs.

Prior to this action, the naira traded at N265 per dollar in the parallel market. Consequently, the naira has depreciated by N80 in the parallel market since the CBN took the action. The steady depreciation was also aggravated by inability of the CBN to meet foreign exchange demand. Vanguard investigations reveal that the parallel market is being bedevilled by demand for foreign exchange from importers of the 41 items excluded from the official market by CBN last year as well as importers of items not excluded from the official market.