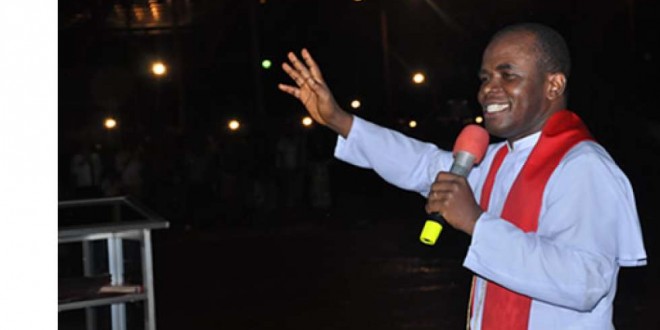 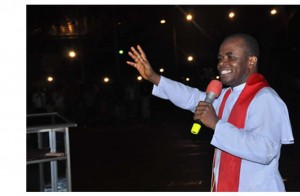 The Catholic Bishops Conference of Nigeria in Abuja on Sunday defended Rv. Fr. Ejike Mbaka’s transfer from the Christ the King Parish, GRA, in Enugu metropolis, to Our Lady Parish, Emene, on the outskirts of Enugu.

But Mbaka’s followers on Sunday accused the Peoples Democratic Party of masterminding the transfer of the founder and Spiritual Director of the ministry.

The Breaking their silence about Mbaka’s transfer, the bishops also condemned the protest against the development.

“They are sometimes the product of one’s psychological disposition, brainwaves or even the result of mental fatigue and should not be confused with absolute reality.”

He added, “We need to think positively about the Nigerian project and act in a manner that builds rather than destroys.”

The Assistant Secretary General of the CBCN and Bishop of Ekity Diocese, Felix Ajakaiye, who decried the controversy over Mbaka’s transfer, said, “When I am transferred I am transferred; no sensation should be attached.”

Delivering a sermon during the opening mass, Archbishop of Abuja, Cardinal John Onaiyekan, said Nigerians were right to be angry at the “criminal corruption” which led to diversion of funds meant for the purchase of arms. He stressed that it was the hope of all Nigerians that such fraudulent acts were now a thing of the past.

“Our gallant troops must never again be left with inadequate resources to carry out the dangerous acts imposed on them on our behalf,” he said.

The cleric, who commended government’s efforts, called for the investigations and prosecution of accused persons should be transparent.

Onaiyekan reiterated his earlier call for collaboration with the church and religious bodies in an effort to bring about a transformation of minds and action by Nigerians.

Following growing criticism, the Catholic Church explained that the cleric’s transfer was not intended as a punishment but rather a “normal church procedure.”

The church added that Mbaka’s transfer was part of a general redeployment of priests by the Enugu Catholic Diocese, headed by Bishop Callistus Onaga.

But the fiery priest had, while handing over to his successor at the CKC, insinuated that the transfer was in line with a witch-hunt against him, adding that he was going to suffer in the new parish.

However, his followers have accused the PDP and the Ohanaeze Ndigbo of influencing the transfer.

They questioned Onaga’s decision to transfer Mbaka when his predecessors allowed him to remain in the parish for about 20 years.

“What Bishop Michael Eneja saw and allowed, Bishop Gbuji protected and watered but Bishop Onaga uprooted in a most barbaric and despondent manner,” they said, referring to the transfer.

The worshippers alleged that Onaga was working with unnamed PDP chiefs who was unhappy with Mbaka’s role in last year’s presidential election.

Mbaka had predicted President Muhammadu Buhari’s victory, and in a message entitled ‘From Good Luck to Bad Luck’, had urged Nigerians to vote for the All Progressives Congress’ candidate.

The Adoration Ministry members added, “Most Nigerians know that the uncommon silence of Bishop Onaga over Fr. Mbaka’s prophesy of the defeat of the Goodluck Jonathan’s PDP-led government by President Muhammadu Buhari was not really for nothing.

“He was just waiting for the time to carry out the script of the stalwarts of the overthrown party.

“Barely a few weeks before the posting, the voice of a faction of the Ohanaeze Ndigbo, a socio-cultural group, was heard barking at Fr. Mbaka to ‘shut up’ over his prophesies.

“And now comes the posting done in such a manner as to really shut Fr. Mbaka up.

“Sources close to Bishop Onaga disclosed to us that the bishop said he transferred Fr. Mbaka out of pressure from Ohanaeze and the PDP.

“The posting is not Holy Ghost-oriented but PDPnized and Ohanaezenized, and any cleric be him a pastor, bishop or cardinal that supported this is an enemy of the Holy Spirit.”

They warned of their readiness to carry out a “religious revolution” over the matter.

They said, “We are ready and determined to carry out a religious revolution in Nigeria if the stage-managed defamation and character assassination sponsored by enemies of the Holy Spirit in the garb of clerics against Fr. Mbaka persists.”